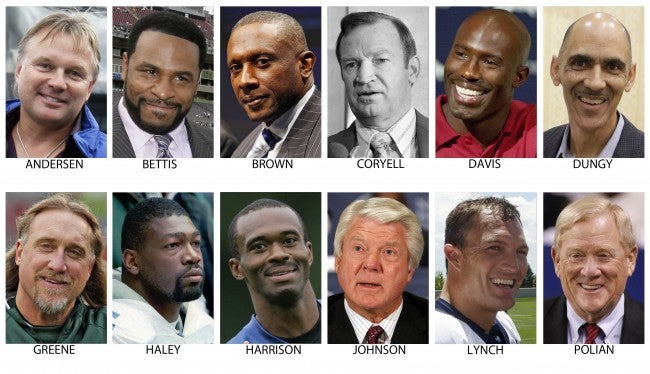 The class of 2015, announced a day before the Super Bowl, also includes a pair of contributors, Bill Polian and Ron Wolf, along with senior selection Mick Tingelhoff.

Former Indianapolis Colts Vice Chairman Bill Polian will be inducted into the Pro Football Hall of Fame on Saturday, Aug. 8.

“Bill’s career has been remarkable and he has had an incredible impact on our league. My relationship with Bill goes back to when we were both general managers and worked together and with others to create the League’s salary cap. Aside from being a great executive, Bill had the innate ability to evaluate and look at a player and identify greatness. To me, that was his greatest talent and what set him apart from everyone else. Bill’s dedication to the NFL and to the Colts will always be remembered. I am proud to call him a Colt, and congratulate him on this great achievement,” said Irsay.

A candidate needs 80 percent of the vote from 46 media members to get in.

The induction ceremony is in August at Canton, Ohio.

Seau, elected posthumously, was the only first-time eligible candidate to get in this year. He committed suicide at age 43 in 2012, and researchers who studied his brain said it showed signs of chronic traumatic encephalopathy, a disease connected to repeated head injuries, including concussions.

His death, less than 2 1/2 years after the end of his playing career, resonated among players in the league, raising worry about the physical and emotional toll the sport takes.

A field-covering, hard-hitting linebacker, the charismatic Seau played in the NFL for 20 seasons, the first 13 with the San Diego Chargers, followed by three with Miami and four with New England. He was Defensive Player of the Year for San Diego in 1992, made six All-Pro teams, and was a member of the league’s All-Decade team of the 1990s.

Patriots coach Bill Belichick said this week he “loved” having Seau on his roster.

“I can’t imagine having a Professional Football Hall of Fame without Junior Seau in it,” said Belichick, whose team plays the Seattle Seahawks in Sunday’s Super Bowl.

“I’d say the one word that comes to me when I think about Junior and football is ‘passion.’ He was a very passionate guy. A lot of energy. Lot of enthusiasm. First guy in the building in the morning – watching film, lifting weights, ready for practice,” Belichick said. “Energy before the game, on the sideline, during the game. An emotional player, but a smart player.”