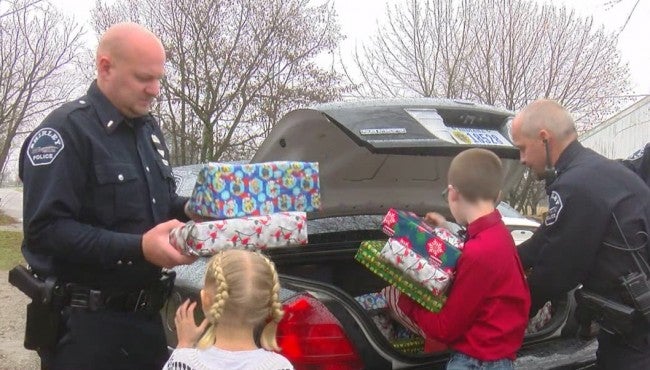 SHIRLEY, Ind. (WISH) — Shirley is a central Indiana town with less than a thousand residents.

This year, the Shirley Police Department proved they have more than enough love to go around.

They surprised three families for Christmas, one of them very dear to the department.

Some people might be afraid if they saw police pull up to their house right before Christmas.

“First, I thought I was going to jail with all the cops coming in. I was like, ‘I didn’t do anything,’” said Veronica Dailey, one of the people police surprised.

And it would be normal to cry with joy once officers said why they were stopping by.

“And then Brian come up and told me what was going on, and I was just. … I cried. It’s the best feeling ever,” said Dailey.

“Last year we saw a lot of tears, more than we see in anything,” Pryor said.

This is the second year the department orchestrated the surprise.

“I am more than thankful, I am just in shock,” said Katy Piper, a mother of four and the second recipient of this year’s surprise.

The chief didn’t have to look far for the third deserving family: He is one of their own.

They were able to surprise Lt. Joshua Miller and his family this year.

“He’s a great individual, he’s a great father, the man. He goes above and beyond in all aspects of life,” said Pryor.

“He started saying our names, and I was like, ‘What?’” said Miller’s son.

The department showed it’s not the number of officers, but the warmth of their hearts, that can make a difference.

“I love seeing my kids being happy,” Miller said.

Pryor says he and the officers pay attention while out on calls to see who they think might need a little help during the holidays.

Along with the city council, they choose the families they think are most deserving.