Trapuzzano widow: ‘I don’t want any other family to suffer’ 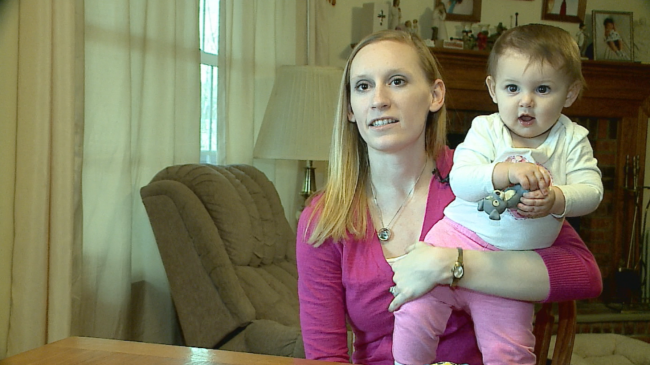 INDIANAPOLIS (WISH) – It’s been less than a year since Nathan Trapuzzano was shot to death on a morning walk, and now his widow says she supports a bill that’s been named in his honor.

“I don’t want any other family to suffer how we’ve suffered,” Jennifer Trapuzzano said. “If there’s something I can do, I’m going to be right there in the forefront.”

Senate Bill 279 is known as the Nathan Trapuzzano bill. It’s co-authored by Senator Jim Merritt, and it was created after a crime that shook the community. Trapuzzano, 24, was shot and killed while on a morning walk on the city’s west side last April. Police officials said a 16-year-old was responsible for the crime.

His wife, Jennifer, was pregnant with their first daughter when Nathan was killed.

“If there’s something I can do, I’m going to be right there in the forefront.”

Today, their daughter Cecilia is nine months old, a daredevil who is always on the go, says her mom.

“We pray for him, and we talk to him together,” explained Jennifer. “Especially when she’s being crazy, I ask him for help.”

Jennifer says for her, these days without Nathan, waking up each day is different. She balances motherhood with grad school.

“There are some days, on the drive to the clinical site, a certain song comes on, or I see something or think of something, and I’m crying again. Other days she’s such a handful, she brings joy, and fun memories, and it’s a good day,” said Jennifer.

She says she supports Senate Bill 279, the bill written after her husband’s death. The bill toughens penalties for crimes involving a gun. It also would require anyone 14 and older to be tried in adult court if charged with using a gun in a crime, or if they carry a handgun without a license.

“I don’t think there’s any true answer of how you can prevent crime from happening,” said Jennifer. “When I first heard about the bill, my first thought, and still my current thought, is, it’s a start. It’s not the start and the end, but it’s a start to get something going within our city. We’ve had an increase in crime, and so many families have been affected.

“I know the pain. I know the grief, I know the challenges, and I would never wish this upon anyone.”

“I wanted to raise awareness that we can make a change. It may start with this bill, this may be just a small step, but that’s not the last step. I think there are a lot of things we as a community can do to keep preventing crime, and keep making our city safer. … I know the pain. I know the grief, I know the challenges, and I would never wish this upon anyone,” she said.

Senate Bill 279 was referred to committee. There has not yet been a hearing on the bill. Merritt says the committee is looking into what new tools the juvenile court may need and other ways to keep parents accountable.

Jennifer says ultimately, she hopes that preventing crime will start at home.

“I think there’s a lot anybody can step up and do. I think a lot of crime starts with initial environmental factors,” she said.

She adds, her husband had an emphasis on the role of the father in the family. She hopes others will step up to be that father figure to those who may not have one, whether that’s at a church group, youth group or boys and girls club.

It’s her faith, family and the support from the community that have helped her get by daily, Jennifer says. Her little one remains a joyful reminder of the moments to come.

“To me, I look back and I think how Nate must be so proud of me, to have continued,” Jennifer says, “For those of us who’ve lost someone, just that realization can be enough sometimes, to make them proud.”