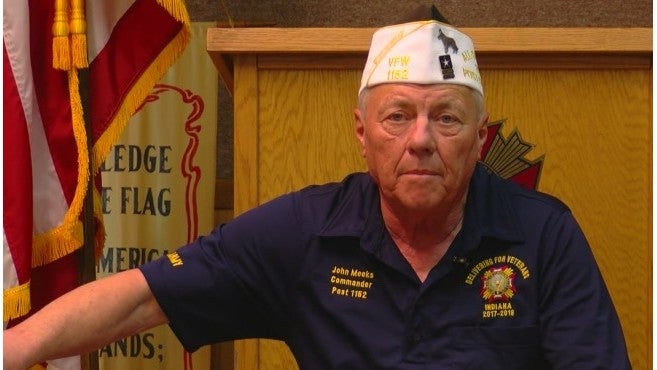 KOKOMO, Ind. (WISH) — Some veterans in trouble with the law will have the chance to avoid jail time by participating in a new program to help steer their lives in the right direction.

It’s called veterans court. It’s already being done in several places around the state, including Marion and Hamilton counties, but a new program kicked off this week to help more veterans in four other Indiana counties: Howard, Miami, Cass and Fulton.

Supporters said the program can make sure there are life-changing results for soldiers transitioning back to civilian life.

No matter the war, veterans say the war does not truly end when they come home.

“Anybody that has been in combat brings back something,” said John Meeks, the commander at VFW Post 1152 in Kokomo. “They just bring it back with them.”

Sometimes demons follow them home as they leave a tight-knit military community and return to the civilian world. And that can lead to a dangerous, downward spiral to drugs and crime.

In Howard County, local attorney Laura O’Donnell said there are “a very high percentage of veterans.” She added that at the same time, there are “many veterans in the Howard County Jail.”

How many? She said she doesn’t know. What she does know is there’s a problem. Jail isn’t always the solution.

Veterans court is typically 18 months of an intense program designed by a judge and the veterans court team, which O’Donnell is part of. It can include court meetings, drug and alcohol tests, and mental health treatment.

They’ll be paired up with another veteran to serve as a mentor to guide them; someone like O’Donnell, who is an Army vet.

“In the military I think sometimes people are taught to be stoic. And that you’ve got to be strong. But sometimes I think people think being strong means not asking for help,” O’Donnell said. “And this program provides help to those not willing to ask.”

There’s an application process and not everyone will be eligible, including violent offenders.

Other veterans courts have had high success rates for graduates. But success is dependent on hard work.

“They are the ones who will have the opportunity to better themselves and hopefully they’ll choose that path,” said Meeks.

If you’re looking to get involved as a mentor, email laura.odonnell@bhcmlaw.com .

If you are looking to get involved in the veterans court as a participant, click here, and go to the “problem solving court information” tab on the left hand side of the page.