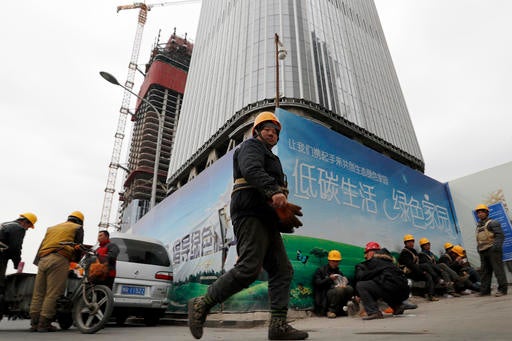 According to Jane King at the Nasdaq, Investors are standing by for his inauguration speech, which is expected to start at roughly noon eastern standard time.

If Trump strikes a hawkish tone on trade and labels, China as a currency manipulator could push stocks lower, according to analysts.

Stocks have been cautious all week on nervousness about the speech and any policy changes that will follow.

China’s economic growth sank to a three-decade low in 2016 as its struggling exporters brace for a possible trade battle with President-elect Donald Trump.

Growth in the quarter ending in December ticked up to 6.8 percent over 2015, supported by government spending and a real estate boom, a gain from the previous quarter’s 6.7 percent, government data showed Friday. Still, for the full year, growth came in at a lackluster 6.7 percent, down from 6.9 percent in 2015 and the weakest since 1990’s 3.9 percent.

That temporary upturn is unlikely to last, economists said.

“We expect clearer signs of a renewed slowdown to emerge during the next couple of quarters,” said Julian Evans-Pritchard of Capital Economics in a report.

Trump’s promise to raise tariffs on Chinese goods after he takes office Friday has fueled tension with Chinese leaders who are trying to keep growth on track while they overhaul a state-dominated economy.

In a rebuke to Trump. President Xi Jinping warned in a speech this week a “trade war” would harm everyone involved. The American Chamber of Commerce in China said Beijing is preparing to retaliate if Trump acts.

“I am hopeful that after his election, President Trump will consider the issue from the angle of mutual benefit and win-win and will develop the long-term, cooperative ‘big country’ relations that have been formed between China and the United States,” a member of the Cabinet’s planning commission, Ning Jizhe, told a news conference.

Asked about the potential impact of action by Trump, Ning said China should maintain “medium to high-speed growth.”

Chinese leaders already face warnings that their reliance on infusions of credit to shore up growth since the 2008 global crisis has driven debt to dangerously high levels that might drag on the economy.

Beijing has warned the economic outlook is “L-shaped,” meaning once the downturn ends, growth is unlikely to rebound.

Also weighing on growth, Chinese leaders are in the midst of a multi-year effort to reduce excess production capacity in steel, coal and other industries in which supply exceeds demand. The glut of low-cost Chinese exports of steel and aluminum have fueled trade tensions with Washington and Europe, which say they are threatening thousands of jobs.

Auto sales also are forecast to weaken. Sales in the world’s biggest auto market rose 15 percent last year but that was supported by a tax cut that expired Dec. 31. Analysts expect this year’s growth to slow to mid-single digits.

Looking at quarter-on-quarter growth, the way other major economies report data, the economy cooled steadily over the course of the year despite the headline figure showing steady expansion. Growth fell to 1.7 percent in the last quarter, down from 1.8 percent in July-September and 1.9 percent in the previous quarter.

Chinese leaders say they will make the economy more productive by giving private companies a bigger role, but last year’s performance still relied on spending by the government and state-owned industry.

Investment by government companies in factories and other fixed assets rose 18.7 percent last year over 2015, according to the National Bureau of Statistics. Investment by private companies was far weaker, growing 3.2 percent.

Real estate sales are booming, which has pushed up growth figures. But regulators are taking steps to cool surging housing prices and bank lending.

Retail sales growth decelerated to 9.6 percent from 10.6 percent in 2015. E-commerce, one of the brightest spots in the struggling economy, soared 26.2 percent over 2015, but that was down from the previous year’s 33.3 percent expansion.

Real estate sales that soared 22 percent in 2016 by volume also are forecast to cool. Growth of investment in real estate might slow to 1 percent from last year’s 6.6 percent, said Haibin Zhu of JP Morgan in a report.

This week, the International Monetary Fund raised its China growth forecast for this year by 0.3 percentage points to 6.5 percent, citing a boost from government stimulus. But it warned rising debt increases the risk of a sharper slowdown.

Total debt has risen by the equivalent of 130 percentage points of annual economic output since the 2008 global crisis, “a pace that has alarmed policy makers and many investors,” UBS economists said in a report.

Still, action on debt is unlikely until after the ruling Communist Party wraps up a twice-a-decade change of senior officials late this year, Tom Rafferty of the Economist Intelligence Unit said in a report.

“It will probably not be until 2018, when politics are more favorably aligned, that we begin to see a more radical approach in this area,” he said.