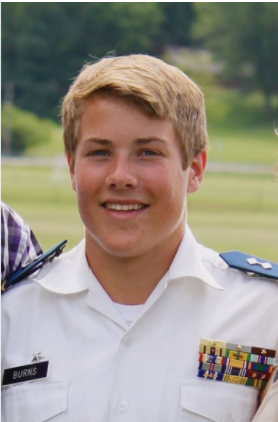 Since then, family, friends and members of the community have been working through Habitat for Humanity to build two homes in his honor.

Sometimes you’ve got to dig deep to find purpose after tragedy.

“I guess I’m willing to dig mud if it’s for Christian,” said Lafayette Jefferson High School senior Konner Hamilton. “I think it means a lot to everybody.”

As a close friend to Christian, Hamilton was a big part of construction. Those who knew him say he was more than a star athlete.

“He’s just someone who would always have your back,” said Hamilton. “There’s not a lot of people like that.”

A lot of people knew that about him. Christian had close friends from every school in Tippecanoe County.

“There’s that rivalry like with all of the other schools, but I guess Christian put that aside and didn’t care. He was friends with everyone,” said Harrison High School senior Lauren Torres.

“McCutcheon, Jeff, Harrison, wherever – he tried to bring everyone together as friends throughout the community,” said Robinson.

They say Christian knew just how to make people laugh.

“I actually have little notes in my phone about times when he said something that was so far in left field that I was like, ‘What did you just say?’ So, that’s definitely, his sense of humor was something that is pretty much just unmatched,” said Hamilton.

But the saying Christian is most known for isn’t funny at all – it’s inspiring.

“The ‘one more’ slogan came from a motivational phrase he had made out of masking tape in our basement. And it started with doing one more rep to get stronger, one more lap to get faster, that kind of thing,” said Christian’s mother Marti Burns.

“One more” didn’t take long after Christian’s death to catch on. Now, there are bracelets, T-shirts and even a “live one more” Instagram where people post how the saying pushes them to be better.

“He used to babysit some kids in town and there’s a really, really special one on there about the little boy learning how to write,” Marti Burns said. “He was learning how to write the letter ‘B’ and he said, ‘I’m done.’ And his brother said, ‘No, Hudson. You gotta do one more for Christian.'”

That’s how Christian would want it. When he was here, he brought out the best in people.

“We miss that part of Christian,” said Marti Burns. “We miss his presence in our house because he was such a delight to be around.”

Christian’s mom hopes his presence is felt by those moving into these homes.

“They’ve taken markers and written on the walls and the studs, messages to Christian, messages to the homeowners,” she said. “It reminds us how much he was loved and that’s helpful.”

In a time when her family felt like nothing could ease the pain, she said they realized how wonderful this community is.

“We had a fundraiser walk-a-thon in January, where we raised money for this first house,” Marti Burns said. “And the numbers of people who came out in support is just outstanding.”

But just one house didn’t really honor the legacy of Christian Burns. That’s why they built one more.

Habitat for Humanity told News 18 it is very unusual to build two houses in someone’s honor. Marti was touched by that and she isn’t the only one.

“We know that this has touched so many people,” she said. “Our hope now is that helps people at whatever point in their lives.”

She hopes the students and other community members who came to build will carry this experience with them.

On Wednesday, hundreds of people gathered to bless the two homes.

Habitat for Humanity said it was the largest blessing it has ever held for a project.

Habitat officials and those who loved Christian have raised funds to build the two houses in both Greater Lafayette and in Haiti.

Lafayette natives Doug and Betsy Shaw and their daughter, Lola, will move in to one of the houses.