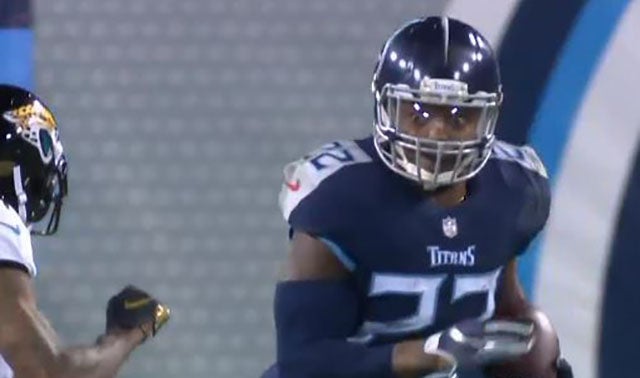 With no room for error, the Tennessee Titans have delivered back to back wins over the Jets and Jaguars and are still alive in their quest to be Big Game Bound.

The Titans pounded the rival Jacksonville Jaguars 30-9 last week on Thursday Night Football to improve to 7-6 on the season. The Titans got a dominant effort on defense completely shutting down Leonard Fournette who managed only 36 yards on 14 carries.

The star of the game was unquestionably Derrick Henry who broke out for not just a career performance, but one of the great games in franchise history. Henry broke the Titans record with 238 yards rushing and 4 touchdowns.  Both were also the best ever for Thursday Night Football.

Now, the question for Henry is can he do it again?  Henry’s play has been improving the last 6 weeks. In the 5 games leading up to his explosion, he was averaging over 4.5 yards per carry after averaging only 3.2 the first 7 games of the year. Sunday he faces a Giants team giving up 121.8 yards per game and 4.4 yards per carry so the opportunity should be there for a decent day if he can bring his “A” game once again.

Even if the Titans win out they need some help along the way and they got some last week with the 49ers beating the Broncos, the Chiefs taking down Baltimore and the Raiders upsetting the Steelers.

As it turns out, the Steelers’ loss may be the biggest of the bunch because it brought the Steelers back within striking distance. The Titans need Miami to lose one of its final three games and either the Steelers or the Ravens to lose one of their final three. Pittsburgh was not even in the conversation a week ago, however, with the Patriots and Saints looming for the Steelers it almost looks certain they will drop another game creating a huge opportunity for Tennessee.

Still, the playoffs are already underway for the Titans who almost certainly have to win out to get in.  A 10-6 record gives the Titans over a 90% chance at this point, a 9-7 record virtually no chance.

First up, the New York Giants Sunday at the Meadowlands.  New York is a 2.5 point favorite.