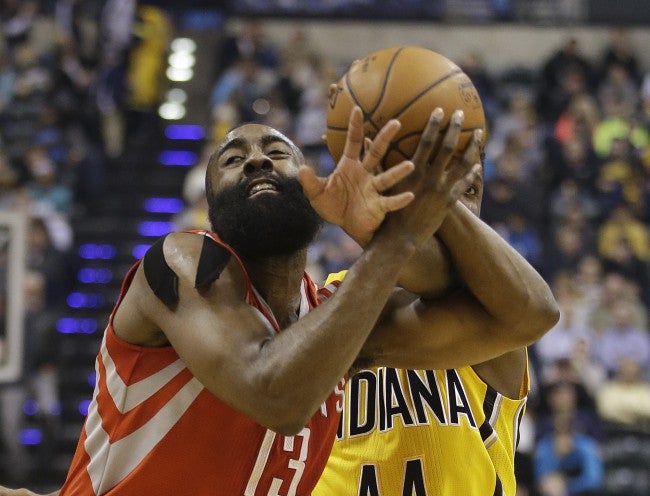 INDIANAPOLIS (AP) – James Harden scored 19 of his 44 points in the fourth quarter and Josh Smith added 18 to help the Houston Rockets beat Indiana 110-100 on Monday night, handing the Pacers their sixth straight loss.

Indiana’s sinking playoff hopes took another big hit despite 23 points from C.J. Watson. George Hill had 20 points for the Pacers (30-40).

It looked as though Houston would run away after jumping to an early double-digit lead and extending the margin to 41-20 early in the second quarter.

But the Rockets closed the quarter on an 8-2 run to take a 76-68 lead. They rebuilt a double-digit margin early in the fourth and then Harden sealed the win by scoring 12 points in a 4-minute flurry.

For Harden, it was another big night against Indiana’s usually staunch defense. He nearly matched his 45-point effort in the first game of the season series by going 10 of 21 from the field and 21 for 22 from the free throw line with seven assists and four rebounds.

He also delivered the first scoring punch and the final knockout blow.

How good was the three-time All-Star? He equaled the Pacers point for point, 15-15, in the first quarter when the Rockets took a 26-15 lead.

Houston took control by starting the second on a 10-2 run, then pushed the lead to as many as 21.

But when Houston lost its composure in the third quarter, the Pacers charged back and eventually got within two.

Harden finally sealed it in the fourth with the scoring burst that helped the Rockets rebuild a 96-82 lead with 5:37 left. The Pacers never seriously challenged again.

Pacers: It’s been a rugged season for Indiana. The team has already had four losing streaks of five or more games for the first time since 1988-89, and now the Pacers have given up 233 points in their last two games, both at home.