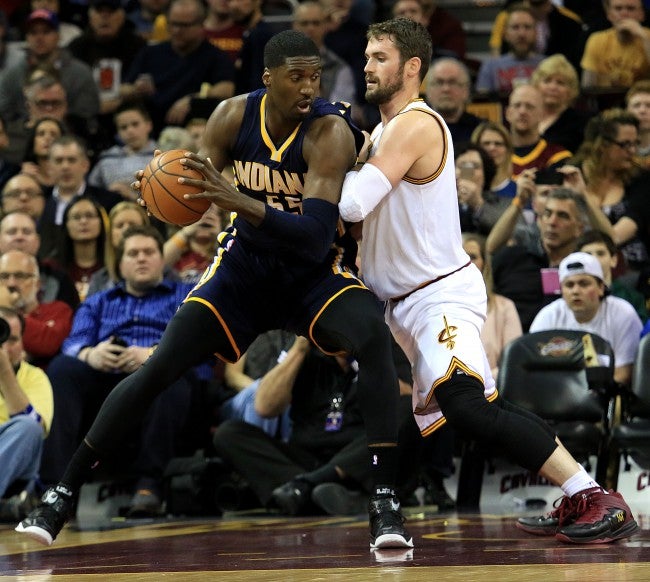 CLEVELAND (AP) – LeBron James scored 29 points – 13 in the fourth quarter- and the Cleveland Cavaliers edged the Indiana Pacers 95-92 on Friday night for their 15th straight win at home.

As usual, James, who was playing despite a head cold, was at his best down the stretch. He scored 11 straight points in the fourth to give Cleveland a 93-92 lead. However, it was Cavs guard Iman Shumpert who came up with the biggest play, running down a long rebound and then knocking down two free throws with a second left.

Indiana had one last chance, but C.J. Miles’ desperation 3-pointer was way off and Cleveland held on to win a game that had a playoff vibe from the start.

Kyrie Irving added 13 points for Cleveland and Kevin Love had 13 rebounds and scrapped underneath for a key rebound in the final minute. The Cavs are 26-6 since Jan. 15.

George Hill scored 24 and Roy Hibbert 20 for the Pacers, who dropped their fourth straight and damaged their playoff hopes.

Reserve guard Matthew Dellavedova gave Cleveland a huge lift, hitting three 3-pointers – two on consecutive possessions early in the fourth. But it was James, arguably the NBA’s best closer, who put the Pacers away.

James scored nine consecutive points, the last two on a layup he accentuated with a scissor kick in the lane, to give the Cavaliers a 91-89 lead with 2:40 remaining. Miles drained a long 3 to put the Pacers up one, but James delivered again with an off-balance runner in the lane.

While the Cavs had James, the Pacers were still without All-Star guard Paul George, who could be eyeing a return from a broken right leg sustained last summer. A team official said George will update his status on Monday following the team’s shootaround.

James was late coming out of the locker room at halftime, and while he waited at the scorer’s table to check in, the Cavs went on a 9-2 run to open an 11-point lead. However, the Pacers responded with a 16-2 spurt highlighted by Hill’s 3-pointer that put Indiana ahead 57-56.

The Pacers are one of the league’s most physical teams with strong perimeter defenders, enforcer David West and the 7-foot-2 Hibbert, who averages nearly two blocks per game and alters several more.

Cleveland now has its own intimidating interior presence in Timofey Mozgov, and he and Hibbert took turns battering each other throughout much of the game.

Pacers: West played 12 minutes before leaving with an undisclosed illness. … With his team scrapping for a playoff spot, Pacers coach Frank Vogel was asked if he keeps an eye on the NBA standings. “Too much,” he said. “I do look at it – probably more than I should. I know how close we are.” … Although Indiana has had success against Cleveland during the regular season, Vogel doesn’t believe there’s a carry-over into the playoffs. “It’s a different animal,” Vogel said. “I don’t think it’s completely irrelevant, but it’s a totally different ballgame.”

Cavaliers: J.R. Smith came in shooting 50 percent (20 of 40) in his last five games on 3-pointers. Cavs coach David Blatt said he’s fine with Smith launching from deep. “He’s got the green light,” Blatt said. “He doesn’t take bad shots and hopefully he continues on that good roll.” … The Cavs won’t play at home again until March 29 as Quicken Loans Arena hosts the NCAA Midwest Regional. … The Cavs are 38-3 when leading or tied entering the fourth.

Cavaliers: At Milwaukee on Sunday.