90s continue with remnants of Barry moving in this week 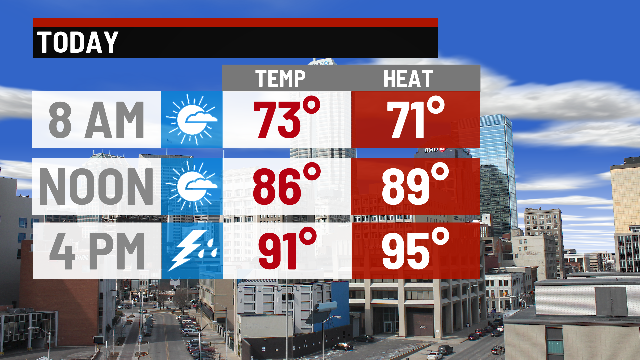 A frontal boundary draped across the northern portions of the state is responsible for some showers and storms in our far northern counties this morning. Expect a few more storms to pop across central and southern Indiana later this afternoon as the atmosphere becomes more unstable. No severe weather is expected, but heavy downpours will be possible.

Highs will again make a run at the lower 90s Sunday afternoon, with heat index values in the middle 90s.

Shower and storm chances will fizzle out after sunset, leaving us quiet and muggy overnight. Lows will fall to the lower 70s.

Much of the day will be dry, hot and humid. A few scattered storms may be possible in east central Indiana by mid to late afternoon.

Highs will top out near 90°, with heat indices in the middle 90s.

Much needed rainfall for a good portions of the state is set to arrive for the mid week, as the the remnants of Barry move through the Midwest. Tuesday afternoon and evening look to be the best time frame for steady, and at times heavy rainfall, with showers starting to subside heading through the day on Wednesday.

Projections place much of central Indiana between a range of 1″-3″ of rainfall out of the system.

Once our mid-week rain moves out, some pretty intense heat and humidity move in. Dew point temperatures will surge into the middle 70s for Thursday and Friday. Add to that temperatures boosting into the 90s, it makes for a miserably hot and humid end to the work week, where heat indices should work into the lower 100s. High heat looks to hold on into next weekend as well.

by: Annessa Chumbley / 22 mins ago