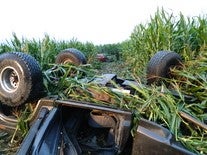 Officers from the Indiana State Police and the Cass County Sheriff’s Department responded about 6:40 a.m. to the crash on State Road 17 near Cass County Road 500 North. That’s about a mile southeast of Lucerne and about 7 miles north of Logansport.

A preliminary investigation found that Kevin Good, 46, of rural Logansport, was driving a 1985 Ford F-150 pickup truck and Anthony Kahl, 41, of Lucerne, was driving a 2016 Dodge Challenger. Both were northbound on State Road 17 near the county road, the release said.

Police said they continue to investigate, but believed alcohol consumption and excessive speed by Kahl were considered contributing factors in the crash.

The Challenger was traveling over the posted 55 mph speed limit, the release said, and rear-ended the Ford. The crash caused both vehicles to travel off the east side of the road into a cornfield. The pickup truck rolled at least once, coming to rest on its top.

Kahl was taken by ambulance  to a Logansport hospital with a complaint of back pain.

Good and his passenger, Jeanie Good, 38, of rural Logansport, were both taken by ambulance to a Logansport hospital. They suffered injuries considered to be non-life threatening.