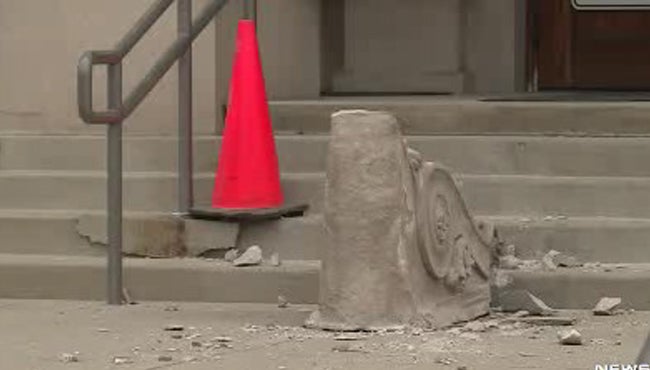 HUNTINGTON, Ind. (WANE) – Huntington County commissioners are investigating how a huge chunk of limestone fell off the west end of the courthouse on Jefferson Street early Sunday morning.

County commissioner Tom Wall received a phone call from the head of security at 4 a.m. He was out of town and returned to find out what happened. He was told by police delivery drivers at the Herald Press heard what happened and called 911.

Wall called DLZ Engineering company based out of Indianapolis. DLZ has been working with Huntington County for the last four months assessing the courthouse for renovations. Wall said engineers assessed the west end of the courthouse and didn’t find any wrong with that end.

Wall said commissioners talked about the problem during their regular Monday meeting. They’re trying to find out what exactly happened. Wall believes the cause could be from a number of situations such as the bad winters, construction going on downtown, putty on the walls giving out and more. It’s still unknown what the cause is.

30,000 people walked through the Jefferson Street entrance last year. Wall said no one was hurt when the piece came down.

People entering the courthouse will have to enter through the Warren Street entrance until the repair is made. Wall said the Jefferson Street entrance should be reopened in about four weeks.