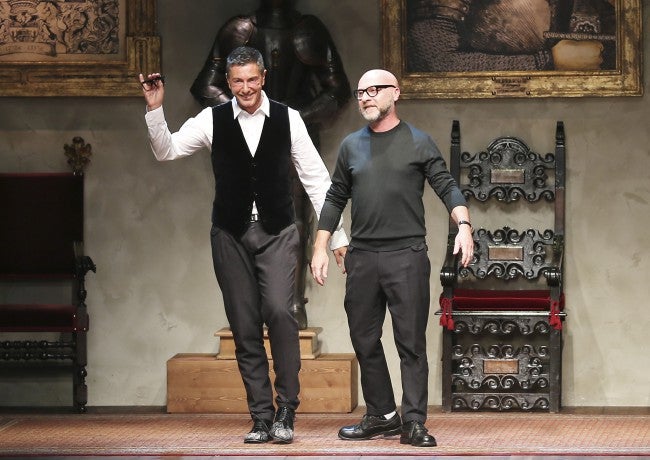 MILAN (AP) – Fashion designers Domenico Dolce and Stefano Gabbana drew applause for sending a pregnant model down the runway as part of their tribute to mothers, but their endorsement of traditional families in a recent interview unleashed harsh criticism and calls to boycott their label.

The designers, under growing social media pressure, issued a statement Sunday saying their comments in an interview with Italian magazine Panorama supporting traditional families with a mother and a father weren’t intended to judge the choices made by others.

John also took to Twitter using the hashtag BoycottDolceGabbana over the weekend.

Singer Ricky Martin, the father of twins born by a surrogate mother, called on the pair to “wake up” in a message on Twitter, admonishing the designers that their voices were too powerful to spread hate.

Gabbana said in a statement Sunday that “it was never our intention to judge other people’s choices. We do believe in freedom and love.”

Dolce says he was expressing his view about family based on his experience growing up in a traditional Sicilian family “made up of a mother, a father and children. I am very well aware of the fact that there are other types of families and they are as legitimate as the one I’ve known.”

Dolce said he was expressing his personal views “without judging other people’s choices.”

The designers, who are gay and formerly were a couple, have put the traditional family at the center of their last two collections, sending a pregnant model and models with their own children down the runway to celebrate motherhood for next winter’s womenswear collection, while featuring grandmothers with their grandsons for menswear.