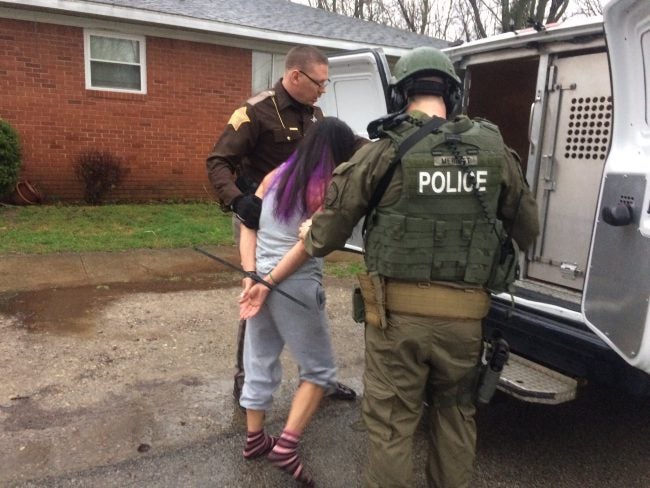 JOHNSON COUNTY, Ind. (WISH) — A drug sweep through Johnson, Morgan and Marion Counties lands several dozen behind bars. Only 24-Hour News 8 was there as police started banging on front doors.

The Johnson County Sheriff’s Office SWAT team suited up with bullet proof vests; some armed with automatic rifles, shields and head gear for extra protection. They were several men deep, strapped and ready to rid the streets of drug dealers as they’re one of several other teams scouring the county and surrounding areas.

Major Jerry Pickett is the SWAT team commander and said, “A lot of heroin, methamphetemine. So yea, we believe in what we’re doing.”

At one Franklin home, police handcuffed Christi Tilson as she screamed, “Can I wait until I find out what’s going on? Can I find out why?”

Tilson faces two felony charges of dealing meth. She was loaded into a sheriff’s van as she yelled, “I can’t bond out of it again. Come on in here.”

In the same house where Tilson lived, police tased a man. Authorities say Eric Miller was not on the original arrest warrant list but officers arrested him anyway.

Just blocks away, police zeroed in on another suspect. This time they had to force open the door. Inside, authorities arrested Terry Stinson. He faces three counts: possession of meth, possession of a syringe and possession of narcotics.

During a news conference later in the afternoon, authorities showed off their biggest bust of the day; nearly 60 grams of meth worth about $6,000. Police arrested Charles Muns in connection.

“We have a big arrest. Got a lot of drugs off the street and made the community safer. But, there’s still drugs out there,” said Franklin Police Chief Tim O’Sullivan.

Authoritiees say they are already working on the next roundup. As for the remaining fifteen who were not arrested on Tuesday, police say they’re actively looking for them.