Death toll at 49 in Greek wildfires 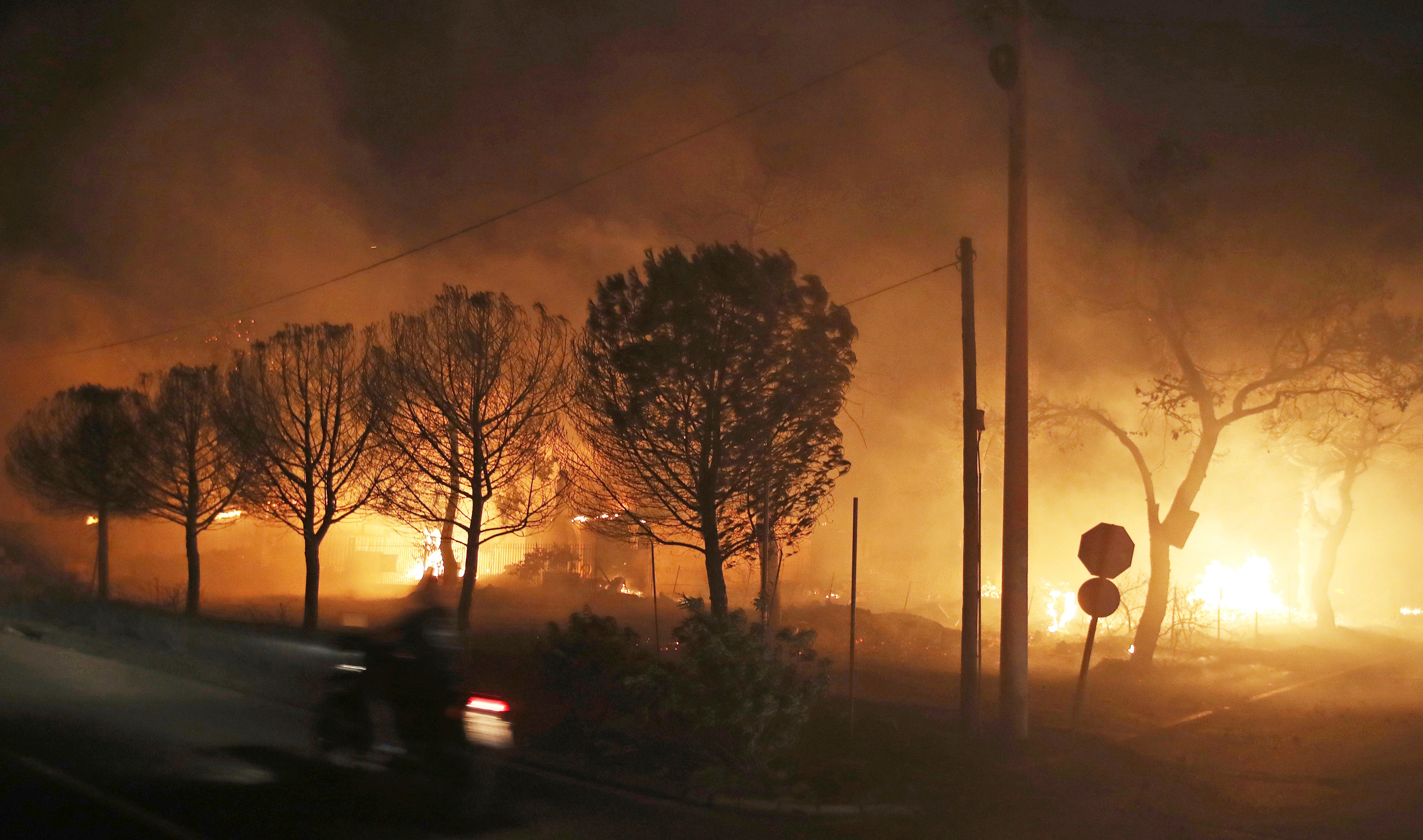 RAFINA, Greece (AP) — Twin wildfires raging through popular seaside areas near the Greek capital have torched homes, cars and forests and killed at least 49 people, authorities said Tuesday, raising the death toll after rescue crews reported finding the bodies of more than 20 people huddled together near a beach.

Many people headed to beaches and the coastline to escape, fleeing flames and choking smoke. More than 700 people were evacuated by sea throughout the night, said Merchant Marine deputy minister Nektarios Santorinios, whose ministry is in charge of the coast guard.

The head of Greece’s Red Cross, Nikos Oikonomopoulos, told Skai television a member of a Red Cross rescue team had told him the crew searching a seaside area northeast of Athens had found 26 bodies, apparently families, huddled tightly together, many of them hugging.

The group is believed to have been discovered near several cars found charred outside a walled compound gutted by the fire.

“Everything happened in seconds,” said local resident Andreaas Passios, who lives next to the compound. “I grabbed a beach towel. It saved my life. I soaked it, grabbed my wife and we ran to the sea.”

Passios said he and his wife stayed by the sea for two hours. “It was unbelievable. Gas canisters were exploding, burning pine cones were flying everywhere.

Spyros Hadjiandreou arrived on the spot looking for missing loved ones.

The fires — one about 50 kilometers (30 miles) west of Athens in Kineta, the other to the northeast of the capital near Rafina — broke out Monday from as-yet-undetermined causes. Fanned by gale-force winds, they spread rapidly into inhabited areas in popular holiday seaside areas, preventing many who were in their cars or homes from managing to flee, fire department spokeswoman Stavroula Malliri said.

One of the survivors from the fire-stricken area near Rafina was former Greek Communist Party leader Aleka Papariga.

“The police tried to direct us away from the fire. But we couldn’t escape it,” she said. “We got stuck in traffic and the flames were on top of us. We managed to find a small gap and we made it out.”

Greece sought international help through the European Union as fires on either side of Athens left lines of cars torched, charred farms and forests, and sent hundreds of people racing to beaches to be evacuated by navy vessels, yachts and fishing boats. The coast guard said 19 people had been found at sea and rescued, while 696 had been picked up from beaches and coastline by boat.

Spain was sending two firefighting aircraft while Cyprus was sending in 60 firefighters to help battle the flames. Israel and Turkey both also offered to help in any way they could.

The fire department said 156 adults and 16 children were hospitalized with injuries. Eleven of the adults were in serious condition.

Winds reached 80 kph (50 mph) as authorities deployed the country’s entire fleet of water-dropping planes and helicopters to give vacationers time to escape. Military drones remained in the air in the high winds to help officials direct more than 600 firefighters on the ground.

“We were unlucky. The wind changed and it came at us with such force that it razed the coastal area in minutes,” said Evangelos Bournous, mayor of the port town of Rafina, a sleepy mainland port that serves Greek holiday islands.

The dock area became a makeshift hospital as paramedics checked survivors, some of them clad in only their bathing suits, when they came off coast guard vessels and private boats. The operation continued through the night.

It was the deadliest fire season to hit Greece in more than a decade. More than 60 people were killed in 2007 when huge fires swept across the southern Peloponnese region.

“It’s a difficult night for Greece,” Prime Minister Alexis Tsipras said after cutting short a trip to Bosnia and returning to Athens.

Showers that passed over the Greek capital Monday missed the two big fires. Heavy rain is forecast across southern Greece on Wednesday.

Forest fires are common in Greece during the hot, dry summers, and temperatures recently hit highs up to 40 degrees Celsius (104 Fahrenheit).