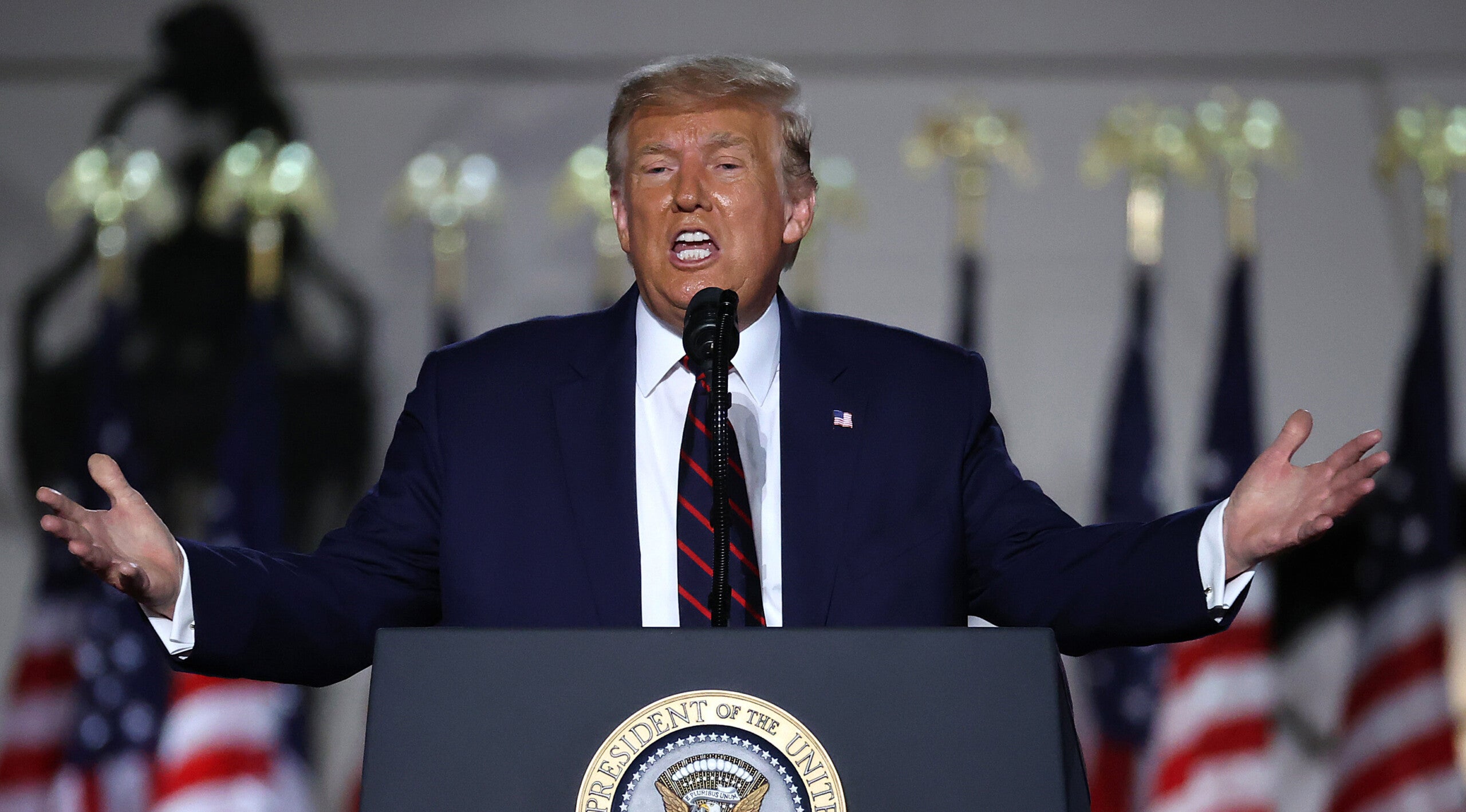 (CNN) — President Donald Trump accepted his party’s renomination for president Thursday night after four nights of propaganda and pageantry promising record prosperity and arguing that his deeply flawed response to the coronavirus was a great success.

“I stand before you tonight honored by your support, proud of the extraordinary progress we have made together over the last four incredible years and brimming with confidence for the bright future we will build for America over the next four years,” he said.

As expected, Trump papered over his flawed handling of the pandemic, calling the virus a “powerful, invisible enemy” and attempting to focus voters’ attention on brighter times ahead — vowing to produce a vaccine for COVID-19 before the end of the year.

“We are meeting this challenge. We are delivering lifesaving therapies, and will produce a vaccine before the end of the year, or maybe even sooner,” he said. “We will defeat the virus, end the pandemic and emerge stronger than ever before.”

He once again blamed China for the spread of the coronavirus, noting that “many Americans, including me, have sadly lost friends and cherished loved ones to this horrible disease.” Trump employed selective statistics to disguise that his administration has presided over one of the world’s worst responses to the pandemic and now has more cases than any other country in the world.

“As one nation, we mourn, we grieve and we hold in our hearts forever the memories of all of those lives that have been so tragically taken. So unnecessary,” Trump said. “In their honor, we will unite. In their memory, we will overcome.”

As Trump spoke Thursday night the nation had passed the grim milestone of more than 180,000 deaths as a result of COVID-19 and some 5.8 million US cases — more than anywhere else in the world. The President is expected to cast his response in glowing terms, highlighting efforts to produce a vaccine by the end of the year and the new announcement on Thursday that the administration is purchasing 150 million rapid tests that will be distributed across the country in partnership with Abbott Laboratories.

The President, who has consistently ignored and undercut the advice of scientists and public health officials, accused his opponent Joe Biden of wanting to “surrender” to the virus.

“Instead of following the science, Joe Biden wants to inflict a painful shutdown on the entire country,” Trump said, arguing, as always, that states should open their economies more swiftly so that Americans can return to work and their children to in-person instruction.

Pandemic ignored at the White House

Given those statistics, the scene on the South Lawn of the White House Thursday night was stunning. Many of the more than 1,500 guests mingled close together shortly before the speeches got started, snapping selfies and chatting as though the threat of the pandemic had disappeared. The 1,500 plastic chairs were arranged some 6 inches apart on the lawn, falling well short of the administration’s own guidelines for social distancing, and most attendees were milling about without wearing masks.

Guests were not told ahead of time that they needed to be tested for COVID-19 when they arrived at the White House. Chief of staff Mark Meadows told reporters that “a number of people will be tested” for coronavirus, but he did not specify who those individuals would be. Health experts on the White House coronavirus task force have been advising Americans to avoid large crowds during the pandemic.

In another jaw-dropping example of the blatant use of presidential power for political purposes during this convention, video screens displaying the Trump-Pence campaign logo were on the lawn underneath the White House’s iconic Truman Balcony and a convention stage was set up on the grounds of a building that has housed American presidents for more than 200 years.

It was just the latest example of how the campaign has trashed normal protocol and decorum designed to protect the institution of the presidency from over-politicization throughout this week.

Among the other blatant uses of official government property and pageantry for political purposes have been a naturalization ceremony in the White House, a pardon for a political supporter, the use of federal property for political speeches and Secretary of State Mike Pompeo addressing the convention while on an international trip.

Police violence and racial unrest on the agenda

Speaking in an uncharacteristically flat voice, Trump delivered an indictment of Biden, claiming that the November election would decide whether “we save the American dream or whether we allow a socialist agenda to demolish our cherished destiny.”

The November contest, he said, will determine whether the country gives “free rein to violent anarchists and agitators and criminals who threaten our citizens.”

“How can the Democratic Party ask to lead our country when it spends so much time tearing down our country?” he asked.

Trump in stark rhetoric also warned that Democrats see a “wicked nation that must be punished for our sins.”

So far Trump has refused to answer questions about the police shooting of Jacob Blake, a 29-year-old Black man. Blake was shot seven times in the back Sunday by an officer as he tried to enter an SUV where three of his children were waiting.

Early Wednesday morning, a 17-year-old Illinois youth — whose social media accounts show an affinity for Trump, guns and the police — allegedly shot and killed two people, and injured another, who were at one of the nighttime protests in Kenosha.

Trump has not addressed the two incidents in Wisconsin or said whether he has watched the video of Blake being shot by police.

Ben Carson, Trump’s secretary of Housing and Urban Development, was the first to address the police shooting of Blake, stating at the beginning of his speech that “our hearts go out to the Blake family” and others affected by the violence in Kenosha.

“In order to succeed in change, we must first come together in love of our fellow citizens,” Carson said. “History reminds us that necessary change comes through hope and love, not senseless and destructive violence.”

“As Jacob’s mother has urged the country, let’s use our hearts, our love, and our intelligence to work together to show the rest of the world how humans are supposed to treat each other,” Carson added.

Carson attacked Democrats who have called Trump a racist. “They could not be more wrong,” he said, arguing that the President had brought African American unemployment to all-time lows and had supported measures in private life and government to promote minority businesses.

Trump has for years dealt in inflammatory rhetoric, from his intervention in the Central Park Five case in New York, his racist Birther campaign against President Barack Obama and his claims that there were “very fine people” on both sides during clashes between white supremacists and protestors in Charlottesville, Virginia.

Before Carson, the convention had largely stayed away from mentioning events in Wisconsin, aside from Pence who on Wednesday night tossed a mention of the city into a line about how “the violence must stop.” Throughout the summer, Trump has described anti-police protesters as “THUGS,” and his administration cleared peaceful protesters with tear gas from a location in front of the White House before the President participated in a photo op in front of a nearby church with a Bible in hand. The administration says the clearing was done so fencing could be put up, not because of Trump’s photo.

Speakers at the convention have repeatedly falsely argued that Biden hasn’t addressed the violence that some protests have devolved into, and Trump is expected to echo those statements on Thursday.

He claimed Biden would bring “lawlessness” to towns all over the United States and described him as a “Trojan horse” for Vermont Sen. Bernie Sanders, Black Lives Matter and “his party’s entire left wing, hidden inside his body just waiting to execute their pro-criminal, anti-police policies.”

Giuliani criticized New York Mayor Bill de Blasio, claiming that “murders, shootings and violent crime are increasing at percentages unheard of in the past.” He then made the incongruent argument that American cities are riddled with crime and deadly violence and seemed to suggest it is Biden’s fault, despite the former vice president not being in any elected office.

In an interview with CNN’s Anderson Cooper on Thursday afternoon, Biden said that Trump is “absolutely” rooting for violence in the country’s streets so he can claim a “law and order” mantle heading into the November election. But Biden also pointed out that the violence playing out around the country is happening under Trump’s watch, despite his attempts to blame his rival.

“The country will be substantially safer when he is no longer in office,” Biden added.

In the lead-up to Trump’s speech, the Republican convention has been an exercise in reinventing the image of a wild and erratic presidency in which Trump has mismanaged the pandemic and openly traded in insensitive racial and sexist rhetoric, largely through his tweets.

Over the last three nights, the President has been portrayed as a benevolent force, a champion of women and a man of humanity and empathy, in an apparent effort to counter the picture of Biden’s political career as painted by Democrats last week.

As the Trump campaign tries to repair the President’s poor standing among female voters, and to humanize his tone-deaf appeals to “the Suburban Housewives of America,” some of his closest female subordinates — including outgoing White House counselor Kellyanne Conway, press secretary Kayleigh McEnany and daughter-in-law, Lara Trump — offered testimony to the President’s support of professional women.

Speakers have accused Biden and his family of being mired in corruption while Trump has refused to divest from his businesses and his daughter Ivanka and son-in-law, Jared Kushner, have earned millions from their commercial interests while working for the US government — a few of a flurry of the conflicts of interest surrounding the administration.

The contradiction between the reality of Trump’s presidency and the image portrayed on television this week was underscored on Thursday when the President blasted the National Basketball Association as a “political organization” after players boycotted playoff games to demand action following the shooting of Blake in Wisconsin in the latest example of police brutality. Players from the NBA and several other sports leagues, including the WNBA, refused to play games on Wednesday and Thursday in protest of police violence.

All week, convention organizers have used Black and other minority speakers to counter the impression that the President is racist. But Trump, and the convention as a whole, has failed to address police violence against Black people. Instead, the issue is raised only in demands for an end to protests that erupted after Blake’s shooting and portraying them as an affront to law and order.