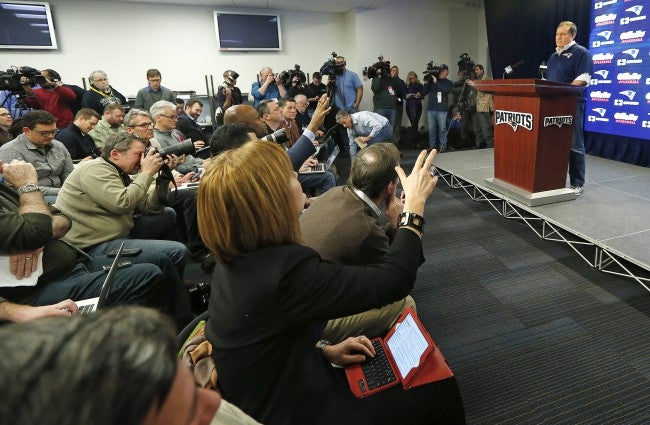 But some football fans aren’t buying it.

“How come the Colts balls, 12 of the 12 stayed fine but 11 of the 12 of the Patriots balls deflated? Doesn’t really add up,” said Chris Jackson inside Kilroy’s Bar & Grill.

Belichick said once quarterback Tom Brady got the footballs to the texture and feel of his liking that they were handed over to officials. It’s their job to inflate them.

It’s an issue that’s consumed the Patriots organization since it’s win over the Colts last Sunday, and only eight days before the Super Bowl.

“I’m embarrassed to talk about the amount of time that I’ve put into this relative to the other important challenge in front of us,” said Belichick.

The NFL has a top executive and an outside law firm investigating the matter.

“I’m afraid that nothing will happen,” said John Stalker. “Belichick has been known for pushing the envelope and the NFL really hasn’t done anything, so I would say nothing is going to happen.”

“Unless you have hard evidence you might as well move on and forget about it,” said David Stockdale.

The Colts organization is moving past it, it’s looking towards next season, building up their roster and defensive line. A welcomed move by fans.

“You know, you beat a team 45 to 7, it really doesn’t come down to how much air is in a football,” said Jonathan Johnson.