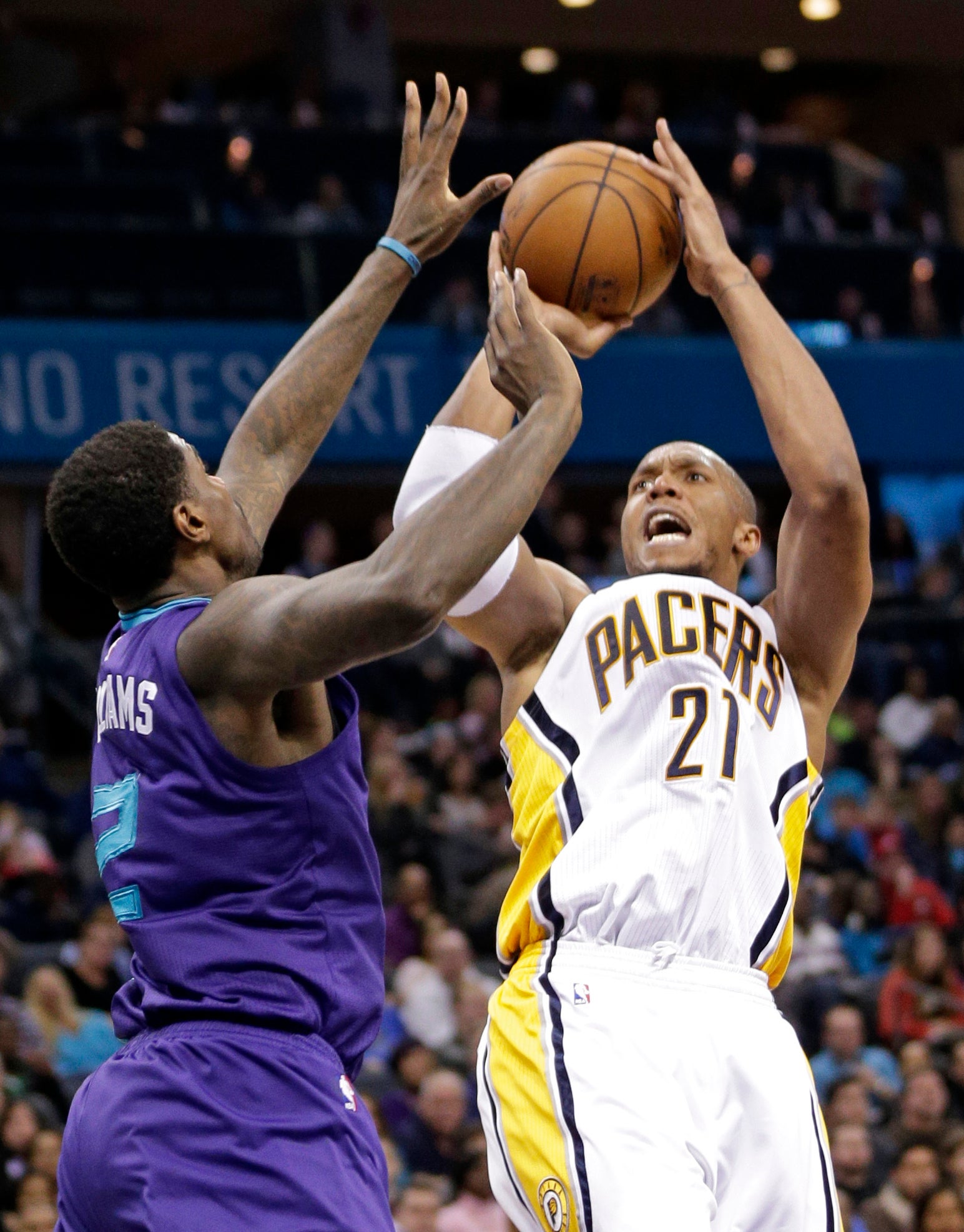 CHARLOTTE, N.C. (AP) – Gerald Henderson scored 20 and the Charlotte Hornets defeated the Indiana Pacers80-71 in overtime on Saturday night despite playing without their top two scorers.

The Hornets outscored the Pacers 12-3 in extra time to hand Indiana its fourth straight loss.

They played without injured Kemba Walker and Al Jefferson.

Lance Stephenson scored 13 points in 21 minutes and spent a good part of the night chewing at his former Indiana teammates, particularly Roy Hibbert.

Things got feisty late in the third when Stephenson lowered his shoulder and knocked the 7-foot-2, 275-pound Hibbert to the floor as the two men headed up the court.

It came after Hibbert had blocked Stephenson’s shot. Officials had already retreated to the opposite end of the floor and didn’t what happened.

David West had 19 points for the Pacers, who were 1 of 9 from the field in overtime.

Michael Kidd-Gilchrist had 16 rebounds for Charlotte and Bismack Biyombo had 14.

It was all Hornets in overtime.

Henderson got things going when he scored on a fast break and drew a foul for a 3-point play.

He added another free throw and Biyombo tipped in a miss to give Charlotte a six-point lead. Marvin Williams knocked down two jump shots to push the lead to 78-68 before C.J. Watson finally scored for Indiana with 35 seconds left.

Coach Steve Clifford took Stephenson out of the game with 6:34 left and the Hornets trailing 61-55 – even though he was leading the team in scoring at the time with 13.

With Stephenson on one knee beside the bench urging his team on, the Hornets stormed back to the take the lead 68-66 when Williams buried a 3-pointer from the top of the key with 51 seconds left in regulation.

Rodney Stuckey made two free throws to tie the game with 13.1 seconds left.

The Hornets had a chance to win it at the end of regulation but Henderson missed an open 20-footer from the right wing after coming off a solid screen from Cody Zeller.

He was averaging 29.8 points per game over the last six for the Hornets, but was held out because of a cyst on his left knee.

The Hornets struggled in their offensive sets without him and shot just 30.7 percent from the field.

Still, Charlotte (16-25) has won six of its last seven games despite also being without Jefferson, who has missed eight games because of a groin injury and is still a couple of weeks away from returning.

Pacers: Roy Hibbert had 12 points and 14 rebounds for the 100th double-double of his career. … West has scored in double figures in eight straight games and 18 of the last 20.

Hornets: Clifford said Walker’s knee injury is something that could linger. “It is one of those things (where) it’s the ultimate day-to-day,” Clifford said. “It’s something that he’d had for a while. From what I understand, he can come in (Sunday) and be fine or it could be longer. I don’t think there is any real way to determine that.”

All Indiana Politics / 32 mins ago