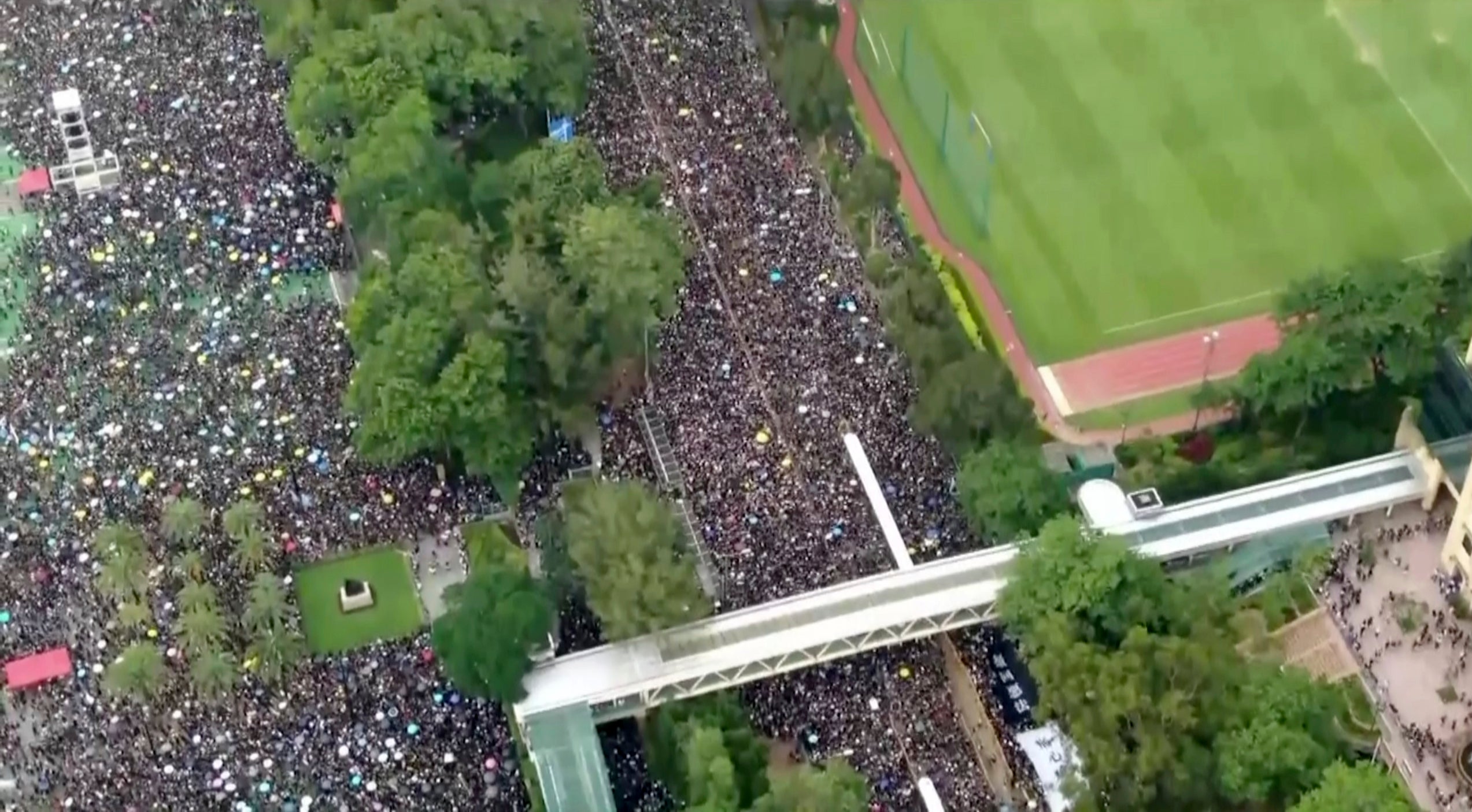 HONG KONG (AP) — Hong Kong police and protesters faced off Monday as authorities began trying to clear the streets of a few hundred who remained near the city government headquarters after massive demonstrations that stretched deep into the night before.

The police asked for cooperation in clearing the road but said the protesters could stay on the sidewalks. Protesters, many in masks and other gear to guard against possible use of tear gas, responded with chants, some kneeling in front of the officers. The move came after activists rejected an apology from the city’s top leader for her handling of legislation that has stoked fears of expanding control from Beijing in this former British colony.

Groups of police, most in normal uniforms not riot gear, sought to clear the roads of metal and plastic barricades to enable traffic to pass through. In some places, the protesters quickly moved to put them back to block traffic.

Hundreds of protesters were sitting or lying along a main road through downtown, but they were scattered over a relatively wide area.

Activists called on Hong Kong residents to boycott classes and work, though it was unclear how many might heed that call.

Nearly 2 million of the city’s 7 million people turned out on Sunday, according to estimates by protest organizers. Police said 338,000 were counted on the designated protest route in the “peak period” of the march. A week earlier as many as 1 million people demonstrated to voice their concern over Hong Kong’s relations with mainland China in one of the toughest tests of the territory’s special status since Beijing took control in a 1997 handover.

The scenes were similar to those seen nearly five years earlier, when protesters camped for weeks in the streets to protest rules that prevented the direct election of the city’s chief executive, the top local official.

One of the activists arrested after those demonstrations, Joshua Wong, was due to be released from prison Monday. He served half of a two-month jail sentence for contempt.

After daybreak Monday, police announced that they want to clear the streets. Soon after, police lined up several officers deep and faced off against several hundred demonstrators on a street in central Hong Kong.

The night before, as protesters reached the march’s end thousands gathered outside the city government headquarters and the office of Chief Executive Carrie Lam, who on Saturday suspended her effort to force passage of the bill.

Hong Kong residents worry that allowing some suspects to be sent for trial in mainland China would be another of many steps chipping away at Hong Kong’s freedoms and legal autonomy. One concern is that the law might be used to send criminal suspects to China to potentially face vague political charges, possible torture and unfair trials.

The protesters are demanding that Lam scrap the proposal for good and that she step down.

Protesters are also angered over the forceful tactics by police use of tear gas, rubber bullets and other forceful measures as demonstrators broke through barricades outside the city government’s headquarters to quell unrest during demonstrations on Wednesday, and over Lam’s decision to call the clashes a riot. That worsens the potential legal consequences for those involved.

In a statement issued late Sunday, Lam noted the demonstrations and said the government “understands that these views have been made out of love and care for Hong Kong.”

“The chief executive apologizes to the people of Hong Kong for this and pledges to adopt a most sincere and humble attitude to accept criticisms and make improvements in serving the public,” it said.

Not enough, said the pro-democracy activists.

“This is a total insult to and fooling the people who took to the street!” the Civil Human Rights Front said in a statement.

Protesters have mainly focused their anger on Lam, who had little choice but to carry through dictates issued by Beijing, where President Xi Jinping has enforced increasingly authoritarian rule. But some were skeptical that having Lam step down would help.

“It doesn’t really matter because the next one would be just as evil,” said Kayley Fung, 27.

Many here believe Hong Kong’s legal autonomy has been significantly diminished despite Beijing’s insistence that it is still honoring its promise, dubbed “one country, two systems,” that the territory can retain its own social, legal and political system for 50 years after the handover in 1997.

After Lam announced she was suspending the legislation to avoid more violence and allow additional debate, Chinese government officials issued multiple statements backing that decision. Lam, however, made clear she was not withdrawing it.

She has sidestepped questions over whether she should quit and also defended how the police dealt with last week’s clashes with demonstrators.

Lam insists the extradition legislation is needed if Hong Kong is to uphold justice, meet its international obligations and not become a magnet for fugitives. The proposed bill would expand the scope of criminal suspect transfers to include Taiwan, Macau and mainland China.

So far, China has been excluded from Hong Kong’s extradition agreements because of concerns over its judicial independence and human rights record.

Prosecutions of activists, detentions without trial of five Hong Kong book publishers and the illegal seizure in Hong Kong by mainland agents of at least one mainland businessman are among moves in recent years that have unnerved many in the city of 7 million.