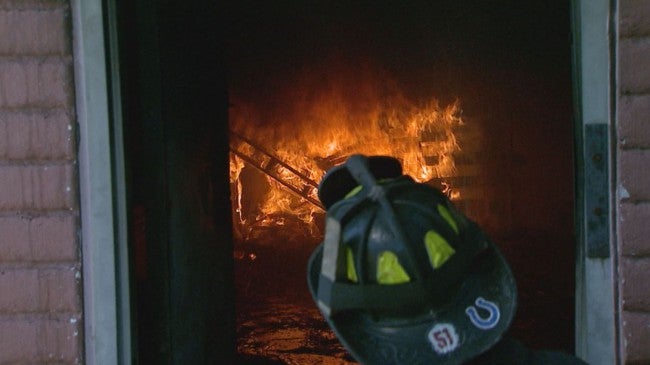 LAWRENCE, Ind. (WISH) – The Indianapolis Fire Department offered special training on Tuesday for city leaders and decision makers on what its like being a firefighter.

“You’re claustrophobic, you were closed in, and I wish I had more ability to look for people,” said Indiana State Representative Mike Speedy (R) Indianapolis, after going into a simulated search and rescue.

This is the first time Marion County took part in Fire Ops 101. Fire officials say this was especially needed under budgetary restraints.

Participants climbed up a ladder to the top of a four-story building, helped extricate a dummy from a crashed car and ran into a fire.

The mission was to stay alive and help those who needed it.

Officials made it clear that it was an IDLH atmosphere which stands for “Immediately Dangerous to Life and Health,” which meant those entering the building could die.

In a 1,000 degree chamber the last thing anyone wants is a worst case scenario to come true, so participants were first suited up in full fire gear, boots and a helmet.

After a quick 101 lesson to keep one hand on the wall at all times, participants went into the simulation.

“When you have no vision at all, and you just have to follow your instincts, the walls, and the guy behind you and in front of you, it’s really tough,” said City-County Councilor Mike McQuillen (R).

“We’re going to try to get everyone involved here to understand what it is to do our job,” said Mike Reeves the President of Local 416, the union representing Indianapolis, Lawrence, Wayne Township and other firefighters across Marion County.

“It was claustrophobic and hot and dark. It was incredible,” said Speedy.

“We’re wanting the minimum to do our job, but we do have to do our job safely and we can’t do that without the proper equipment,” said Reeves.

Some things couldn’t be replicated: CPR was performed on a dummy, but at a scene they’re doing it for 30 minutes nonstop.

And although the jaws of life were used to extricate a trapped victim, the weather was near perfect.

“Think about the car being on its roof, smashed down, three o’clock in the morning, nighttime, maybe there’s multiple cars involved, maybe there’s 10 inches of snow on the ground,” said Chris Stevens, a firefighter with Decatur Township, who was describing less than ideal conditions for a rescue.

But despite having to simulate some events, participants say it was a lesson learned.

“I would say there’s a whole new appreciation of what everybody goes through in this,” said McQuillen.