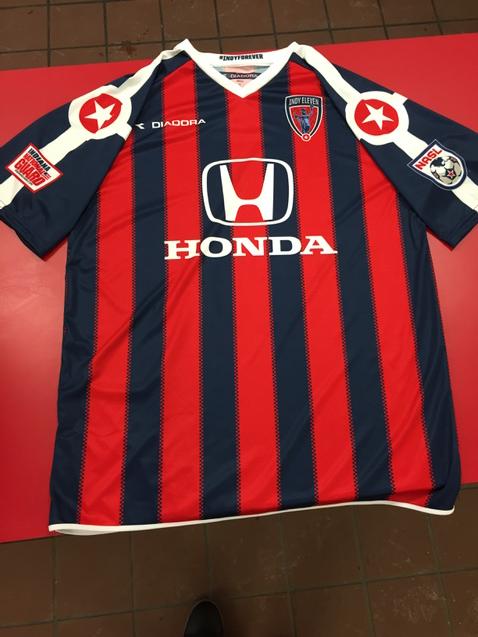 INDIANAPOLIS (WISH) – The Indy Eleven unveiled their brand new alternate jersey for the team on Tuesday.

“This is the alternate jersey we’ll be wearing for U.S. Open Cup games,” Indy Eleven President and General Manager Peter Wilt said. “I love the fact that it’s been designed to look like the city of Indianapolis’ municipal flag – you see on the shoulders it has the stars, and it actually looks like the city flag. We’re very proud to wear the city colors.”

The jersey was unveiled on-air before the start of a team garage sale in Broad Ripple where fans could buy team-worn shirts and team worn jerseys, among other items. That ran from 7 p.m. to 9 p.m. for the general public and 6 p.m. to 7 p.m. for season ticket holders.

For more information on the jerseys, go to the Indy Eleven website.

Across the street, at the Vogue Theater, was a party for fans called Mardi Gol. Doors opened at 8 p.m. and music started at 9 p.m.

Remember, all Indy Eleven Professional Soccer regular season home matches will be broadcast on WISH-TV during the 2015 season.