‘It’s like losing a brother each time’: Southport mourns death of 4th officer 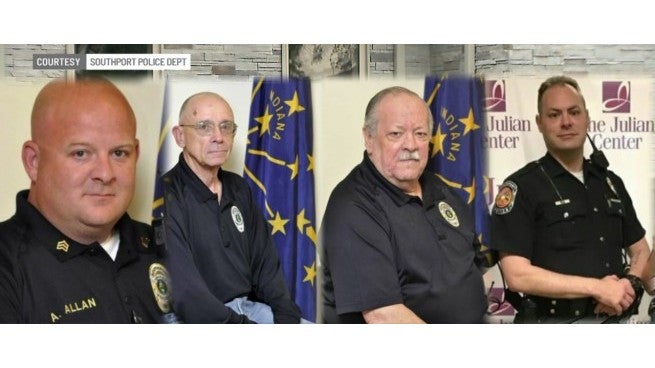 SOUTHPORT, Ind. (WISH) — The Southport Police Department on Thursday was mourning the loss of one of their own again in what has turned out to be one of the most difficult years the department has faced.

Southport Police Officer Rich Parnell lost his battle with cancer Thursday morning. Parnell is the fourth officer the small department has lost in the past 14 months. Three of those deaths have come in the past three months alone.

“It does affect you,” said Southport Police Chief Thomas Vaughn. “We can be tough and we can do our job, but we’re still human and we’re still feeling. A lot of these guys they worked the same days. Five or six days. they are family. Sometimes you see them more than you see your wives or your kids sometimes.”

Vaughn said he’s doing everything he can to keep morale up when times are at their lowest of lows.

“We’re all family here because we are so small,” Vaughn said. “We know everybody’s wives and kids. So to lose one. It’s like truly losing a brother each time.”

Losing four police officers is a huge hit for the Southport Police Department, which only has 45 officers.

Nearly all of them are reserves.

It all started when Lt. Aaron Allan was killed in the line of duty in July 2017. Vaughn remembered Allan’s kind personality.

Then, Officer Joe Baughn died in June 2018 from pancreatic cancer.

“He was the jokester,” Vaughn said. “He always liked to tell jokes and give you a hard time.”

Just a month ago, Officer Phil Parmelee died of a sudden heart attack.

“Phil was a former police chief, so he gave me a lot of stuff,” Vaughn said and then laughed as he reminisced about Parmelee’s knack for mentorship.

Then Thursday morning, Parnell, died after a yearlong battle with cancer.

“It (the cancer) was just everywhere,” Vaughn said. “His parents both passed away around the same time. He was the only son, the only kid. So, for the last year, every Friday, I would take him to chemo and his appointments. Rich had a big heart. Rich cared and did whatever he could for anybody.”

All tough losses the men and women in blue of Southport have taken to heart.

“It is very important to get these officers to understand it’s OK to grieve and it’s OK to break down,” Vaughn said. “We just need to manage that, make sure that they’re healthy mentally and emotionally.”

As the grieving process continues, Vaughn said, the public can do one simple thing to help ease the pain his officers are feeling.

“Just say ‘hi’ to them,” Vaughn said. “Just, you know, give them a hug. Do something. That’s the best way to show the support to them right now. They need to know that that community is still there and that they do care.”

Vaughn added that the department is also taking contributions to help fund Southport training and equipment as part of a new memorial dedicated to Lt. Aaron Allan. The cost is $100 per person and $250 per business. Each contributor’s name will be placed on the memorial wall outside the Southport Police station.

Since Parnell doesn’t have any family left, Vaughn also encouraged the public to attend his funeral and visitation on Monday. Visitation will be from 5-7 p.m. at Singleton Community Mortuary and Memorial Center, 7602 Madison Ave. in Indianapolis. Services will start at 7 p.m.