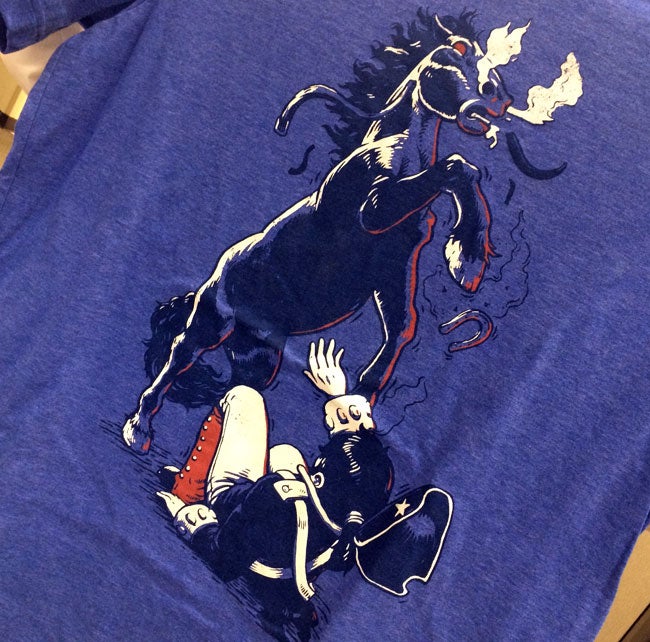 FISHERS, Ind. (WISH) – If you’re on social media, you’ve probably seen the recent image posted by Patriot’s quarterback Tom Brady. The Facebook post depicts him riding a Colt, and got a lot of fans on both sides talking.

In preparation for the game, local T-shirt company, Vardagen, had been working on a design of their own. Once Brady’s went viral, they decided it was time to print theirs.

“We had no idea what to expect really, I think that’s why we ordered so few, just in case it didn’t go over well,” said Vardagen employee, Jeffrey Jackson. “But it went over really well!”

“We get a call at 12:00 a.m. saying, ‘Hey we might be doing something crazy tomorrow,’ and we’re all in,” said Derick Pettersen, another employee.

“Design was done Tuesday morning, we printed them Tuesday afternoon and they were probably sold already by Tuesday evening,” Jackson recalls.

Now, they’re churning out hundreds more to meet demand. They can print a shirt in just four seconds.

This isn’t the first time the company has put out a popular rivalry shirt. Hoosiers may remember a shirt released last year labeled “Luck Dynasty.”

“It’s just a great feeling,” said Jackson. “Kind of keeps us motivated to keep producing our own unique clothing.”

Folks on Monument Circle gave their stamp of approval to the T-shirt design.

“Too bad it’s not Tom Brady wearing Uggs!” said one fan. “That would’ve been awesome.”

Vardagen rushed in more shirts to print on Wednesday. For a link to buy the shirt, click here. You can also pick one up in stores Thursday.