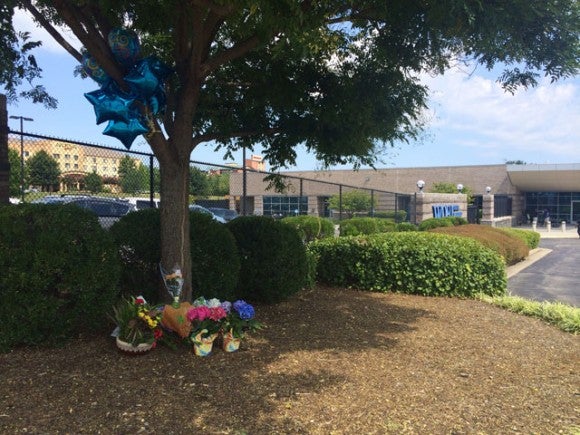 INDIANAPOLIS (WISH) – Two employees of WDBJ-TV news were shot to death during a live report on Wednesday in Moneta Virginia by a former employee.

Officials say the shooting happened at 6:45 a.m. at the Bridgewater Plaza near Smith Mountain Lake. An interviewer was also shot and is listed in stable condition.

“Our prayers go to all who go out in the field to report news in our communities. We recognize that we all are subject to the challenges of mental health and violence in our society ..for no one is exempt!” said Chief Rick Hite. “Please know our law enforcement family are appreciative of your work and join with you in mourning the loss of the WBDJ7 TV crew.”

Governor Mike Pence sent out a series of tweets about the days event.

Grieved by the terrible act of violence in VA this morning involving 2 members of @WDBJ7 & another innocent bystander (1/3)- Governor Mike Pence (@GovPenceIN) August 26, 2015

Our thoughts and prayers go out to the victim’s families, loved ones & colleagues during this difficult time (2/3)- Governor Mike Pence (@GovPenceIN) August 26, 2015

Oftentimes we forget that members of the media go into harms’ way to keep the public informed. We should be thankful for their service (3/3)- Governor Mike Pence (@GovPenceIN) August 26, 2015

Trending Headlines
“Our thoughts and prayers go out to your media partners in Virginia after this tragic incident. I hope you all stay safe.”

Virginia State Police believe Vester Flanagan, the suspect shooter, took police on a brief chase on Interstate 66 before his vehicle went off the road. Police say he shot himself but was in critical condition.

WDBJ confirmed the victims of the shooting were 24-year-old Alison Parker and 27-year-old Adam Ward.