Trump, Congress square off over virus aid as crisis worsens 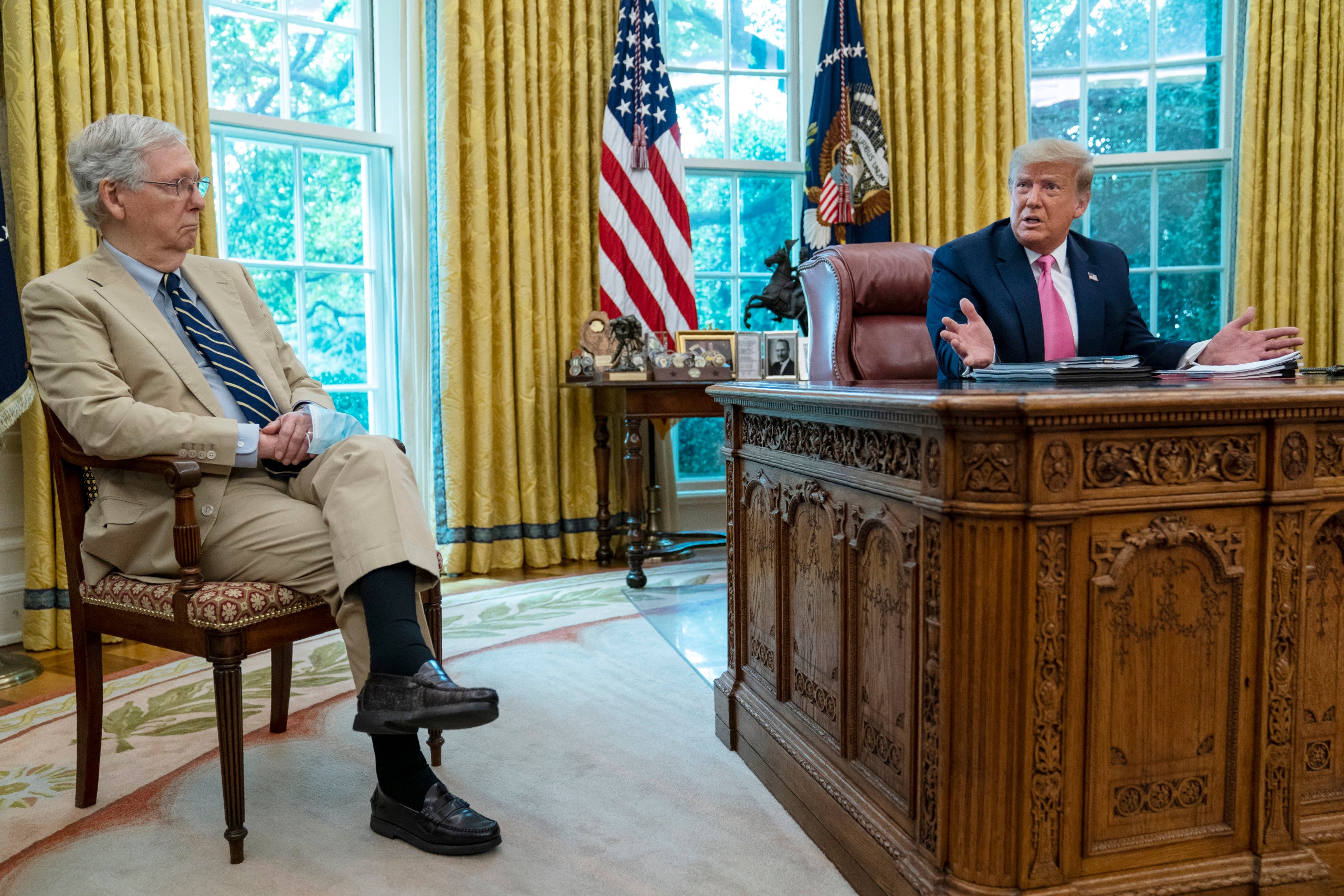 WASHINGTON (AP) — President Donald Trump acknowledged a “big flareup” of COVID-19 cases, but divisions between the White House and Senate Republicans and differences with Democrats posed fresh challenges for a new federal aid package with the U.S. crisis worsening and emergency relief about to expire.

Trump convened GOP leaders at the White House on Monday as Senate Majority Leader Mitch McConnell prepared to roll out his $1 trillion package in days. But the administration criticized the legislation’s money for more virus testing and insisted on a full payroll tax repeal that could complicate quick passage. The timeline appeared to quickly shift.

“We’ve made a lot of progress,” Trump said, but added, “Unfortunately, this is something that’s very tough.”

Lawmakers returned to a Capitol still off-limits to tourists, another sign of the nation’s difficulty containing the coronavirus. Rather than easing, the pandemic’s devastating cycle is churning again, leaving Congress little choice but to engineer another costly rescue. Businesses are shutting down again, many schools will not fully reopen and jobs are disappearing, all while federal aid will expire in days.

House Speaker Nancy Pelosi, D-Calif., said any attempt by the White House to block money for testing “goes beyond ignorance.”

The political stakes are high for both parties before the November election, and even more so for the nation, which now has registered more coronavirus infections and a higher death count — 140,800 — than any other country.

Mnuchin vowed passage by month’s end, as a $600 boost in jobless aid is set to expire, and said he expected a fresh $1 trillion jolt of business tax breaks and other aid would have a “big impact” on the struggling economy.

On Capitol Hill, McConnell faces not just pressure from the White House but also splits within his ranks, which have chiseled away at his majority power and left him relying on Democrats for votes.

The package from McConnell, being crafted behind closed doors, is expected to include $75 billion to help schools reopen. It will likely replace an expiring $600 weekly unemployment benefits boost with a smaller amount. The cut in unemployment assistance is designed to ensure that jobless people do not receive a greater benefit than if they were working. Regular state benefits vary widely, and the measure would peg the federal bonus payment to a percentage of the state benefit.

McConnell’s package may also send a fresh round of direct $1,200 cash payments to Americans below a certain income level, likely $75,000, and create a sweeping five-year liability shield against coronavirus lawsuits.

But the administration was panning the proposal’s $25 billion in new funds for virus testing and tracing and insisting on the payroll tax cut, Republicans said.

At Monday’s White House meeting, Trump said he wants a full payroll tax repeal, said one Republican who spoke on the condition of anonymity to discuss the private meeting. Trump then put economist Art Laffer on speakerphone. Laffer is part of a conservative group favoring the tax break. The GOP leaders indicated only a partial repeal would be included in the coming bill.

Easing the payroll tax is dividing Trump’s party because it is used to finance Social Security and Medicare. The tax is already being deferred for employers under the previous virus relief package. Supporters say cutting it now for employees would put money in people’s pockets and stimulate the economy, but detractors warn it would do little for out-of-work Americans and add to the nation’s rising debt load. McConnell is straining to keep the bill’s total price tag at $1 trillion.

GOP senators swiftly pushed back as the Republicans and the White House battled over priorities.

GOP Sen. John Cornyn of Texas was among several Republicans saying he’s “not a fan” of a payroll tax holiday.

Sen. Lamar Alexander of Tennessee, the chairman of the Health committee, said, “All roads to opening school, going back to work, opening child care lead through testing.”

Trump has insisted that the virus would “disappear,” but the president’s view did not at all match projections from the leading health professionals straining to halt the alarming U.S. caseload and death toll.

Schumer warned Monday his side will block any effort from McConnell that falls short, reviving a strategy from the last virus aid bill that forced Republicans to the negotiating table. This time, the House has approved Pelosi’s sweeping $3 trillion effort, giving Democrats momentum heading into negotiations.

Joe Biden, the Democrats’ presumed presidential nominee, stated his own priorities. The new package should “deliver a lifeline to those who need it most: working families and small businesses,” he said.

Trump raised alarms on Capitol Hill when he suggested last month at a rally in Oklahoma that he wanted to slow virus testing. Testing is seen as the best way to track the virus to contain its spread. Another Republican familiar with the process said about half of the $25 billion previously approved remains unspent. Senate Democrats are investigating why the administration has left so much on the table.

The proposed virus aid package would be the fifth, following the $2.2 trillion bill passed in March, the largest U.S. intervention of its kind. While many Republicans hoped the virus would ease and economy rebound, it’s become clear more aid is needed.

The jobless rate remained at double digits, higher than in the last decade’s Great Recession, and a federal eviction moratorium on millions of rental units approved in the last bill is about to expire.