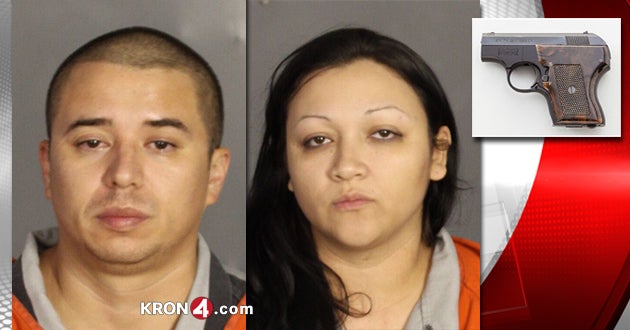 WACO, Texas (KRON) – A woman caught hiding methamphetamine in her purse after getting pulled over, was also found to have been playing Russian roulette with her private parts.

At about 11 p.m. Tuesday, officers stopped a vehicle for a traffic violation several hundred feet near an elementary school. According to police, officers discovered 2.7 grams of meth stashed under the driver’s seat.

The passenger, a female, was carrying 29.5 grams of methamphetamine in her purse along with a set of digital weighing scales.

Ashley Cecilia Castaneda, 31, and the driver, Gabriel Garcia, 30, were arrested and charged with possession of methamphetamine in a drug free zone.

As officers were transporting the suspects to jail, Casteneda told them she was carrying “a fully loaded Smith and Wesson .22 cal. Semi-auto handgun inside her vagina.”

“Officers immediately stopped and a female officer searched Castaneda discovering she had in fact placed a loaded Smith and Wesson pistol inside her body cavity,” police said.

According to police, the weapon had a round chambered and a full magazine of bullets. The pistol was taken into custody and Castaneda has also been charged with unlawfully carrying a weapon.