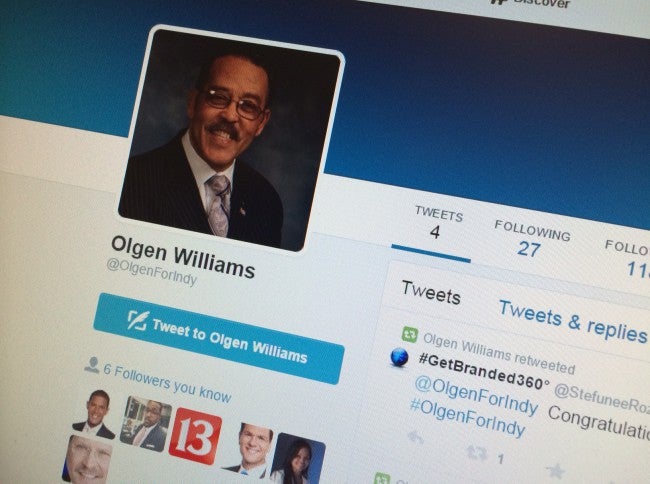 It’s a reversal from the position Williams announced just last Friday when he said he wasn’t running.

But he didn’t say that he wouldn’t run.

Now the big question is: will Williams challenge the Republican Party establishment?

24-Hour News 8 met Williams and his son and advisor Aaron in Haughville Park just behind the Christamore House. He was executive director there for 11 years before becoming Deputy Mayor.

He said that weekend talks with family members and advisors convinced him to run.

“I felt that in my heart that it was the time for me to do this,” he said. “I want to continue to serve the city.”

Williams says he got encouragement from outgoing Mayor Greg Ballard.

The announcement comes three days after Marion County GOP Chairman Kyle Walker revealed that a mystery candidate will step up on Wednesday, hours before the 5 p.m. deadline to file for slating, the party’s endorsement process.

When asked if he has the money, Williams said, “Right now? No, I’m still raising money. Not officially yet because I haven’t put my application in yet. I’m not raising any money now.”

He went on to say, “People ask me about slating, that’s a conversation that, I got a day and a half to make my mind up about that.”

The other option for Williams is to simply oppose the party endorsed candidate in the May primary.

If he goes to slating and loses he can get 90 percent of the slating fee back but only if he agrees to drop his name from the ballot.

Look for him to pass on slating and stay in the race, a move that makes him a longshot for the GOP nomination.