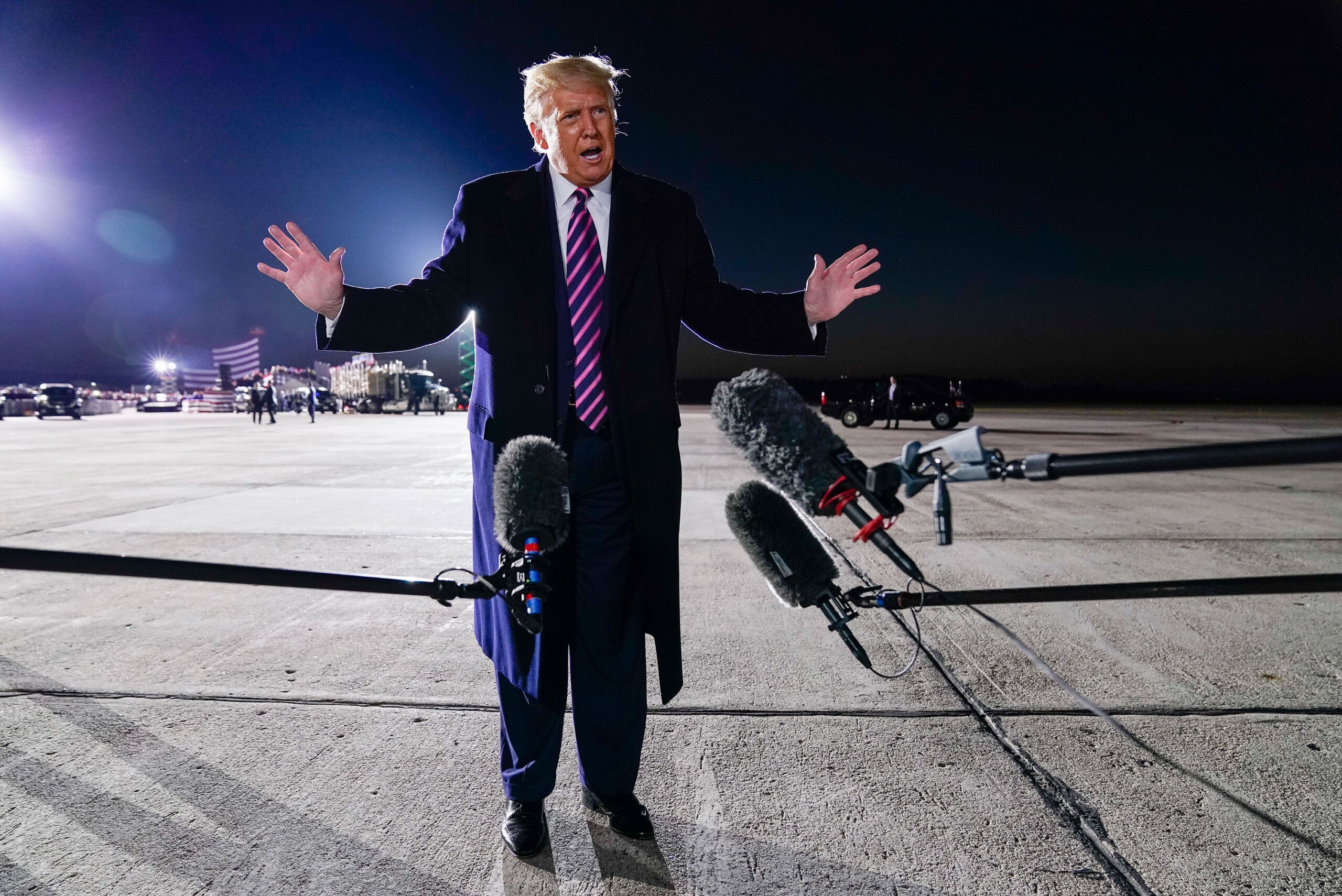 (CNN) — President Donald Trump said he will have a nominee “very soon” to fill the vacant seat on the Supreme Court and he thinks he’ll make his choice next week.

“We want to respect the process, and the process will move, I think it is going to move very quickly actually. I agree with the statement put out by Mitch McConnell. I agree with it actually 100%. I put out a very similar statement you saw, so I think we’re going to start the process extremely soon, and we’ll have a nominee very soon,” Trump told reporters before departing the White House on Saturday.

On Friday night the Senate Majority Leader said in a statement just hours after Justice Ruth Bader Ginsburg passed away that, “President Trump’s nominee will receive a vote on the floor of the United States Senate.”

“I think the choice will be next week, I do,” Trump later added.

According to a source familiar with the internal conversations, Trump has indicated that he would like to name a nominee very soon. However, much of this is dependent on when Ginsburg is buried. Allies have raised concern about naming a replacement before she has had a proper burial, two sources told CNN.

Trump on Saturday morning said that Republicans have an “obligation” to fill the vacant seat on the Supreme Court “without delay,” as Democrats argue the Senate should refrain from confirming a replacement until after the next president is sworn in.

“@GOP We were put in this position of power and importance to make decisions for the people who so proudly elected us, the most important of which has long been considered to be the selection of United States Supreme Court Justices. We have this obligation, without delay!” Trump wrote on Twitter.

White House communications director Alyssa Farah told Fox News on Saturday that the administration will move in “Trump time” on a Supreme Court nominee and is “going to look to move in the coming weeks.”

“Well, whether we have a vote or not is really a question for the Senate and for Leader (Mitch) McConnell, but it is fully this President’s intention to do his job under the Constitution and to appoint someone to the seat,” Farah said, also claiming that the date of the Nov. 3 election is “irrelevant” to the President’s desire to nominate someone to fill the vacant seat.

Ginsburg’s death — and McConnell’s subsequent statement Friday — opens up a political fight over the future of the court less than two months before Election Day on Nov. 3. The vacancy on the bench creates what many conservatives view as a once-in-a-generation opportunity to move the makeup of the court from its current split of five conservative justices and four liberal justices to a more dominant 6-3 majority.

When it comes to determining who will be the replacement — one source said conversations are revolving around three main issues — are they a committed conservative and textualist, do they have any Brett Kavanaugh issues, and will they cause problems for conservatives down the road by evolving like Chief Justice John Roberts.

Whatever happens, one of the sources involved said that everyone knows how ugly this process is going to get. “This is going to make the Kavanaugh hearings look like a pillow fight,” the source said.

CNN previously reported that the President had been “salivating” to nominate a replacement for the liberal justice even before Ginsburg’s death Friday and the possibility of picking her successor has weighed on his mind, according to a source close to the President.

The source told CNN that Trump specifically has said he would “love to pick” federal appeals judge Amy Coney Barrett, who is a favorite among religious conservatives, but doubts he’ll secure support from the U.S. Senate.

Barrett is among Trump’s list of 20 potential conservative nominees he released earlier this month in an attempt to galvanize his base.

A senior administration official told CNN that the White House is prepared to move “very quickly” on putting forward a nominee to replace Ginsburg once Trump signals his intentions.

In a message to GOP senators on Friday, McConnell did not indicate a timeframe for considering the nomination but made clear he believes there’s enough time to take up the nominee this year. While nominees typically take two to three months to process, McConnell, who controls the majority of the Senate, could fast track the process.

Conservatives are pushing McConnell behind the scenes to consider moving before the November election to fill the vacancy — potentially leaving the conference divided over what timeline is best.

Republican Sen. Ted Cruz, who sits on the Senate Judiciary Committee, told Fox News on Friday that he believes Trump should nominate a successor to the court next week.

Ultimately, it will be McConnell’s decision and not one he’ll make without input from his members in the coming days.

In speaking with reporters Saturday morning, White House press secretary Kayleigh McEnany was asked by CNN’s Joe Johns if the president has been in contact with McConnell or other Senate Republicans on next steps.

“Not that I’m aware of,” she replied, adding, “Right now the president is squarely focused on honoring the legacy of Justice Ruth Bader Ginsburg.”

Trump and McConnell spoke by phone Friday following Ginsburg’s death, a source familiar later confirmed to CNN on Saturday. Trump raised the names of Barrett and Barbara Lagoa as potential nominees during his call with McConnell, according to two people familiar with the conversation. Trump raised them unsolicited and McConnell didn’t weigh in on either or talk about his personal preferences, the sources said.

Lagoa has the backing of many evangelicals while Trump lawyer Pat Cipillone has shown support for Barrett.

McEnany also called on Biden to release a list of potential Supreme Court nominees so voters know where he stands.

Before news of Ginsburg’s passing, Biden told reporters Friday that he doesn’t think he will release any names of potential Supreme Court nominees before the election.

Trump has tried pressuring his 2020 rival to release a similar list, saying that Biden has “refused” to do so “perhaps because he knows the names are so extremely far left that they could never withstand public scrutiny or receive acceptance.”

This story has been updated with additional developments Saturday.