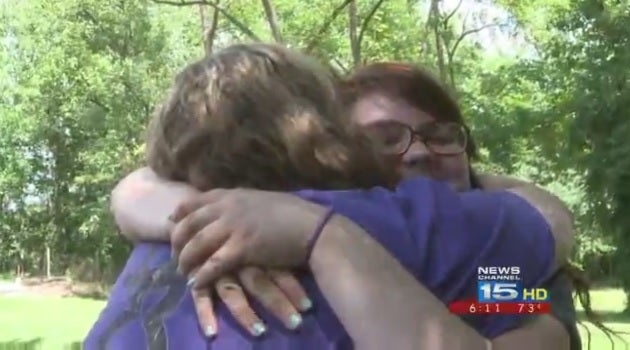 COESSE, Ind. (WANE) — Imagine waiting to meet your long-lost sister for the very first time. That was the case for 22-year-old Montana Williams Thursday.

“Mostly nervous,” Williams said, waiting to meet her sister. “I could probably give you about 100 other ways to describe it and they’d all mean pretty much the same thing.”

The two found each other Wednesday on Facebook and decided to meet the next day. After 24 agonizing hours, it was finally time. The two had a long embrace before sitting down to talk.

Montana and her sister, 23-year-old Cieara Gerber, were both adopted at birth. They both knew they had a sister but never thought they’d get the chance to meet. But they never gave up hope.

“Mostly just excited and happiness and joy,” Gerber said about how she was feeling. “Just to experience and get to know my family and where I come from and have a sister. It’s the most amazing thing.”

Her sister felt the same way.

“Giddy would be one of them and I’m just a little bit in shock right now actually,” Williams said.

After some pictures they got to learn more about each other.

“Just like everything we’ve been through the same. It’s just surreal,” Gerber said about her sister.

Something the sisters have in common is their health. Both have been in and out of doctors offices most of their lives.

“I was diagnosed with Lupus in May, but I’ve been affected by it for many years,” Williams said.

So what do you say to someone you’ve been searching for for years but never met? For Montana and Cieara, the answer is everything.