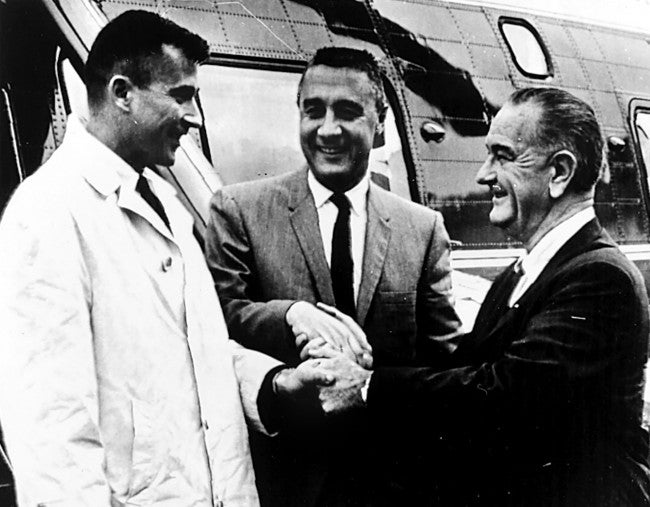 On March 23, 1965, America’s first two-person space mission took place as Gemini 3 blasted off with astronauts Virgil I. Grissom and John W. Young aboard for a nearly 5-hour flight.

In 1775, Patrick Henry delivered an address to the Virginia Provincial Convention in which he is said to have declared, “Give me liberty, or give me death!”

In 1806, explorers Meriwether Lewis and William Clark, having reached the Pacific coast, began their journey back east.

In 1914, the first installment of “The Perils of Pauline,” the legendary silent film serial starring Pearl White, premiered in the greater New York City area.

In 1940, the radio program “Truth or Consequences,” hosted by Ralph Edwards, was first broadcast over four CBS radio stations in New York and New England.

In 1942, the first Japanese-Americans evacuated by the U.S. Army during World War II arrived at the internment camp in Manzanar, California.

In 1956, Pakistan became an Islamic republic.

In 1973, before sentencing a group of Watergate break-in defendants, Chief U.S. District Judge John J. Sirica read aloud a letter he’d received from James W. McCord Jr. which said there had been “political pressure” to “plead guilty and remain silent.”

In 1983, President Ronald Reagan first proposed developing technology to intercept incoming enemy missiles – an idea that came to be known as the Strategic Defense Initiative. Dr. Barney Clark, recipient of a Jarvik permanent artificial heart, died at the University of Utah Medical Center after 112 days with the device.

Ten years ago: A federal appeals court refused to reinsert Terri Schiavo’s feeding tube and the Florida Legislature decided not to intervene in the epic struggle over the brain-damaged woman; Schiavo’s parents then filed a request with the U.S. Supreme Court. An explosion at a BP oil refinery in Texas City, Texas, killed 15 people. Truck driver Tyrone Williams was convicted in federal court in Houston for his role in the 2003 deaths of 19 immigrants he was smuggling across Texas. (After initially receiving a life sentence, Williams was resentenced in Jan. 2011 to nearly 34 years in prison.)

One year ago: During a visit to Beijing, U.S. first lady Michelle Obama told Chinese professors, students and parents that she wouldn’t have risen to where she was if her parents hadn’t pushed for her to get a good education. Adolfo Suarez, Spain’s first democratically elected prime minister after decades of right-wing rule under Gen. Francisco Franco, died in Madrid at age 81.

Thought for Today: “What some call health, if purchased by perpetual anxiety about diet, isn’t much better than tedious disease.” – Alexander Pope, English poet (1688-1744).