Trump on ‘Tonight Show:’ Will apologize ‘if I’m ever wrong’ 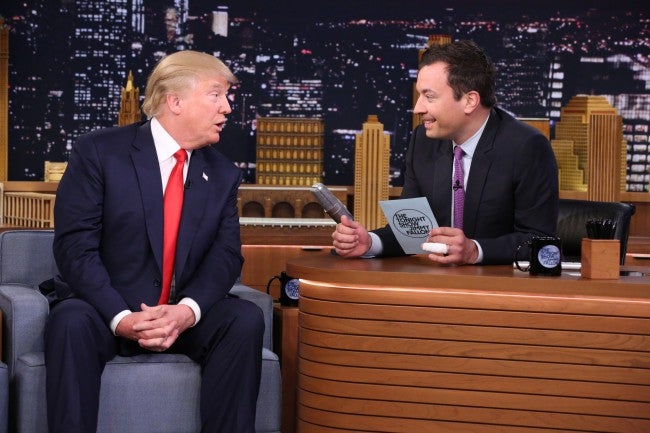 NEW YORK (AP) – Donald Trump clarified, sort of, a long-standing question about his personality during an appearance on Friday’s “Tonight Show.”

Host Jimmy Fallon asked him, playfully, if the billionaire developer and GOP presidential front-runner has ever apologized for anything.

“I fully think apologizing is a great thing,” the famously self-assured Trump replied before winning the studio audience’s applause by adding: “But you have to be WRONG. … I will absolutely apologize sometime in the hopefully distant future if I’m ever wrong.”

That’s how it went, with both Fallon and the audience eating out of his hand.

In what passed as one of the segment’s more serious moments, Fallon asked what Trump was doing on the campaign trail that his Republicans aren’t to win support from voters.

Trump interview session with Fallon was remarkably similar to a comedy sketch that had Fallon impersonating Trump, complete with orange wig, as they faced one another on opposite sides of a picture frame, as if one of them were the other’s mirror image.

In this setting, Trump could be interviewed by the only person he deems worthy of the task – himself.

“How are you gonna create great jobs in this country?” asked Fallon-as-Trump during the exchange.

“By doing it. It just happens!”

During the real, desk-and-sofa interview, Trump shared his vision as president for America: “We have to become rich again, and we’re going to become great again.” The crowd cheered.

Trump’s guest spot on the NBC show was taped only hours after he tweeted that he had purchased NBC’s half of the Miss Universe Organization, giving him full ownership and completing a divorce begun in June when NBC announced it was ending its relationship with its co-investor in the beauty pageants and the host of its long-running “The Celebrity Apprentice.”

In June, the network had announced it would sever ties with Trump because of comments he made about Mexican immigrants during his campaign kickoff remarks.

“What’s refreshing,” Fallon told him, “is, you’re off-the-cuff, you get yourself in a lot of trouble sometimes.

“I think you dig yourself a hole sometimes, a deep hole, and then instead of getting out of the hole, you just dig deeper. And if you keep digging, eventually you might come out in China and be the president of China.”

As the interview drew to a close, Fallon proposed a new campaign song for Trump to consider. Pressing a key on his MacBook, he brought to life a pounding anthem by DJ Khaled called “All I Do Is Win.”

“What do you think?” asked Fallon.