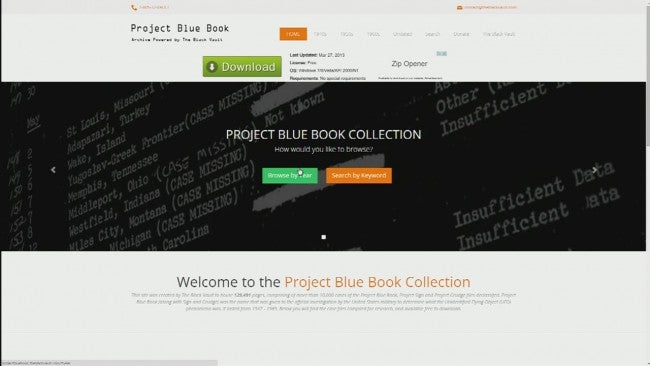 INDIANAPOLIS WISH) – More than 100,000 pages of de-classified UFO files compiled by the U.S. government in the 1950s and 1960s are now available online.

“It’s a very valuable resource,” Greenwald said. “Because it gives you an inside look of the 22-year investigation of the military into the UFO phenomena.”

Project Blue Book was the U.S. government effort to compile those reports in an attempt to understand and explain what people were seeing.

While the documents do not shed any new light on UFO sightings, they do not quiet the fascination conspiracy theorists have with alleged sightings of extraterrestrial aircraft.

Indiana University professor and head of the astronomy department John Salzer doubts the scientific validity. One school of thought is the government was interviewing citizens for defense purposes and to make sure no one was stumbling on top secret projects.

“I don’t think there’s any conspiracy to hide the potential for alien visits because that wasn’t really what the government was thinking about,” Salzer said. “At the time they were thinking about developing weapons and aircrafts that would give them superiority countries that we were fighting against at the time.”

Greenwald says the documents describe events that are unexplainable.

“There are quite a few cases in the Blue Book Files and even outside of the Blue Book files of UFOs having some type of physical effect on the ground or on a specific area that no one can denial,” Greenwald said.

To view files of UFO cases from Indianapolis in the 1950s, click on the following links: