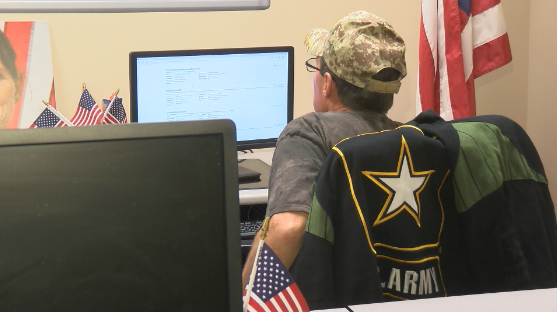 INDIANAPOLIS (WISH) — The unemployment rate for the nearly 22 million veterans in our country has been on the decline.

But in a recent survey by Prudential that looked into veterans’ employment challenges, vets named “finding a job” as the greatest challenge in transitioning from military to civilian life.

Even though the military has exit programs to help prepare the men and women for re-entering civilian life, it’s often not enough.

In the survey, two thirds of veterans said they experienced a “difficult” time when they left the military.

There are local resources to help.

Roger Duety is preparing an order for a customer at his new job making trophies at Bardach Awards, but he doesn’t have a background in this business.

The Navy veteran served four years as an aviation mechanic, which he discovered is a job-search benefit.

“Being a veteran, that kind of helped because Ryan, who hires people here, has hired a few veterans,” Duety said.

But the path to his first full-time job since leaving the service hasn’t been easy.

“I went to a couple job fairs with Robin and then she came across a flyer for Bardach Awards, and I just sent them my resume,” he said.

Duety’s success story is a point of pride for the non profit.

They work every day to help vets get back on their feet.

“This year, from January to September, we helped 248 veterans in some way. One hundred seventy four of those veterans were able to find permanent employment,” HVAF VP of Marketing Debra Des Vignes said.

“They feel anxious; they feel nervous about going back in the workforce,” she said. “There is a gap on their resume and they don’t know how to explain that gap.”

Sometimes that gap is more than veterans think they can overcome.

“PTSD from Desert Storm for me was pretty traumatic,” Army veteran Roy Elmore said, “It cost me my marriage. I went to alcohol and drugs and eventually, when I was up here in Indianapolis, I was living under a bridge just last year.”

With help, Elmore was able to get into transitional housing and a work placement program at the VA hospital.

“I’m going through that process right now with resume building and interview process, things like that,” Elmore said.

He said his future looks bright for the first time since leaving the Army in 2001. It’s a prospect he never thought possible during his darkest days.

“You asked me this a year ago and it wouldn’t have even been on my mind,” he said.

His advice for other veterans is to just ask for help.