Woman hospitalized for weeks after infection from callus shaver during pedicure 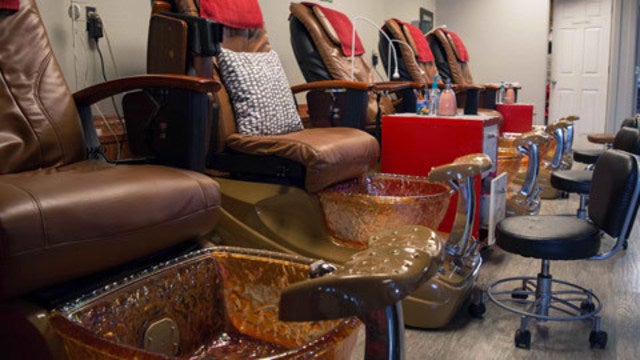 (WNCN) – A woman spent weeks in the hospital after doctors say she got a strep infection from a callus shaver during a pedicure.

The infection was so bad Tracy Martinez in North Carolina said she almost lost her leg and will have to be on medication the rest of her life.

To try and prevent things like that, the State Board of Cosmetic Art Examiners conducts annual inspections of salons and its staff is on the lookout for illegal tools and other problems.

But, the problem is that it’s hard for consumers to tell what’s a legal tool is and what isn’t.
In the case of Martinez, the Winston-Salem woman assumed her salon was doing things right.
“Going into a salon, you trust the person and trust they know their profession,’’ she said. “You trust they know what tools they are using.”

Linda Elliot, the executive director of the state Cosmetic Arts Board said “there are reusable tools specifically made for the industry that are safe,” because they can be disinfected by being placed in a solution called Barbicide.

Elliott also said there are one-time tools like pumice stones which can be used to remove callused skin. These are legal as long as they are used once and thrown away.

But, even if a legal tool was disinfected, Elliott said that, if the skin was cut using it, it becomes an open point for bacteria to enter.

That’s what happened to Martinez. She said she received two cuts on her ankle from the prohibited callus shaver.

Elliott said inspectors can’t be everywhere, so customers need to be proactive by refusing to allow a salon to use a razor to remove a callus or dead skin from your body.

The N.C. Board of Cosmetic Art Examiners has prohibited the use or possession of razor-type callus shavers since 2004.

She said, because current regulations prohibit the use or possession of razor type callus shavers, if an inspector finds one in a shop, fines of $300 dollars are levied for every illegal device in the salon.
In light of this prohibition, she said many shops have turned to the use of various types of rasps, files, and other abrasive implements for the care and treatment of feet.
It can be hard for consumers to tell the difference between legal and illegal tools used in a salon.

For example, legally allowed metal files or rasps look much like a cheese grater. State inspectors said cheese graters are sometimes found in salons and are illegal.

The metal rasp tool is legal because it can be disinfected.

The state board has an extensive salon checklist online. There are also about a dozen things to look out for at salons:
•    General cleanliness
•    No hair, nail clippings, dust, or debris on the floors
•    Clean and dirty implements in the same container
•    Failure to keep clean implements
Anyone with a complaint must submit it in writing. That can be done by fax, mail, or email. It can also be done online.

In addition, the board also keeps track of all licenses used by salon employees.