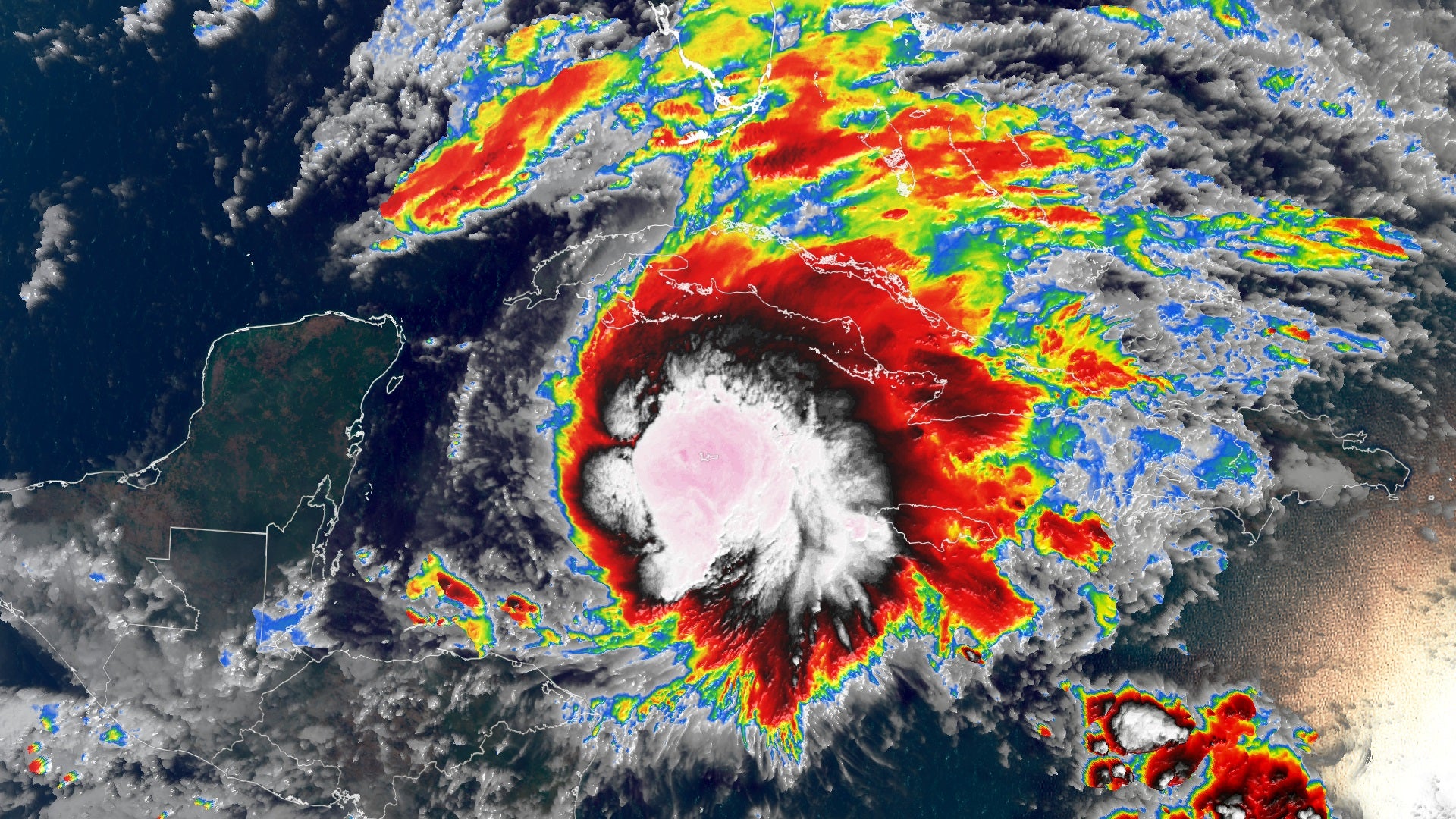 (CNN) — Tropical Storm Eta is lashing the Caribbean with torrential rainfall and damaging winds on Saturday as it approaches Cuba.

The storm is currently moving northeast away from the Cayman Islands and toward central Cuba at 16 mph as of 5 p.m. ET. It has sustained winds of 60 mph with tropical storm-force winds extending up to 105 miles out from the storm’s center.

Isolated rainfall totals of more than 2 feet are possible for both Cuba and the Cayman Islands through the middle of next week. These high rainfall totals could lead to life-threatening flash floods and landslides in areas with higher terrain.

A dangerous storm surge of 2 to 4 feet is also forecast along the coast of Cuba near where Eta makes landfall Sunday.

Hurricane and storm watches have been issued for south Florida and the Florida Keys by the hurricane center.

“Tropical storm conditions are expected by late Sunday in the Florida Keys and along portions of the southeast Florida coast, where a tropical storm warning is in effect,” the center said Saturday afternoon.

A tropical storm warning also is in effect for the Cayman Islands, portions of central Cuba and the northwestern Bahamas.

Eta made landfall along the coast of Nicaragua as a Category 4 hurricane on Tuesday afternoon. It brought more than 2 feet of rain to parts of Nicaragua and Honduras this week. Another 2 to 5 inches of rain is still in the forecast for Saturday.

Florida Gov. Ron DeSantis declared a state of emergency for eight counties on Saturday as Eta approaches, according to Fredrick Piccolo Jr., communications director for the governor.

The governor declared the emergency for Broward, Collier, Hendry, Lee, Martin, Miami-Dade, Monroe and Palm Beach counties in south Florida “out of an abundance of caution,” Piccolo said.

After passing Cuba, Eta is expected to track toward and potentially over the Florida Keys on Monday and then into the Gulf of Mexico.

A tropical storm warning is in effect in southern Florida from north of Golden Beach to Jupiter Inlet and west of Chokoloskee to Bonita Beach, which includes Lake Okeechobee.

“Recent heavy rain across the region has led to saturated ground and urban flash flooding could become a threat by the end of the weekend and into early next week depending on the forward movement of the storm,” CNN meteorologist Derek Van Dam said.

A flood watch is in effect for much of southern Florida through Tuesday evening, where 6 to 10 inches of rainfall possible.

Miami-Dade County Mayor Carlos Gimenez declared a state of emergency Friday as the county monitors the storm. Gimenez said the ground is already saturated from days of rainy conditions so “flooding is a major concern.”

The county plans to open an evacuation center on Saturday afternoon for residents living in mobile homes, low-lying areas, or anyone else who needs refuge, according to a county government news release.

After Eta passes southern Florida and the Keys, there is still uncertainty as to where the storm will track next in the Gulf of Mexico. There are a handful of mid- and upper-level atmospheric steering patterns responsible for Eta’s seemingly erratic forecast track. Due to all of this steering, changes in the track or forward motion of Eta are likely over the weekend.

In Latin America and the Caribbean, emergency disaster plans are currently in place in Cuba and Mexico while evacuation and relief efforts continue in Guatemala and Honduras, which have been the hardest hit so far, with dozens of dead or missing.

In Honduras, at least 23 people have died and two are missing, according to the latest report by the country’s Permanent Contingency Commission released Friday evening.

The unfortunate weather comes as coronavirus cases continue to rise in the region, where virus-related deaths currently account for one-third of the total global deaths from the virus.

In Cuba, the country’s Civil Defense updated its warnings on Saturday and issued an “Alarm Phase” for several western and central areas.

“In the face of Eta, there is no time to waste and protection is the priority,” Cuba’s President Miguel Díaz-Canel tweeted on Saturday as Eta is expected make landfall over the island on Sunday.

In Mexico, the country’s National Meteorological Service said Eta’s “broad circulation is causing intense to torrential rains on the Yucatan peninsula and in southeastern Mexico.” The rain is expected to last through Monday, the service said, and will affect the states of Chiapas, Oaxaca, Quintana Roo, Tabasco and Yucatán.

Mexican President Andrés Manuel López Obrador suspended his initially planned visit to the states of Nayarit and Sinaloa, and traveled instead to Tabasco state on Saturday, due to flooding and meteorological conditions linked to Eta.

Lopez Obrador warned of a potential “emergency situation” in Tabasco as widespread flooding from Eta is expected, and said he is calling an emergency meeting of the Security Cabinet.

“We are talking about rainfall never seen before” in the area, López Obrador said in a video message posted on his official Twitter account.

López Obrador said emergency preparations are underway so that destruction and the loss of human life can be prevented.