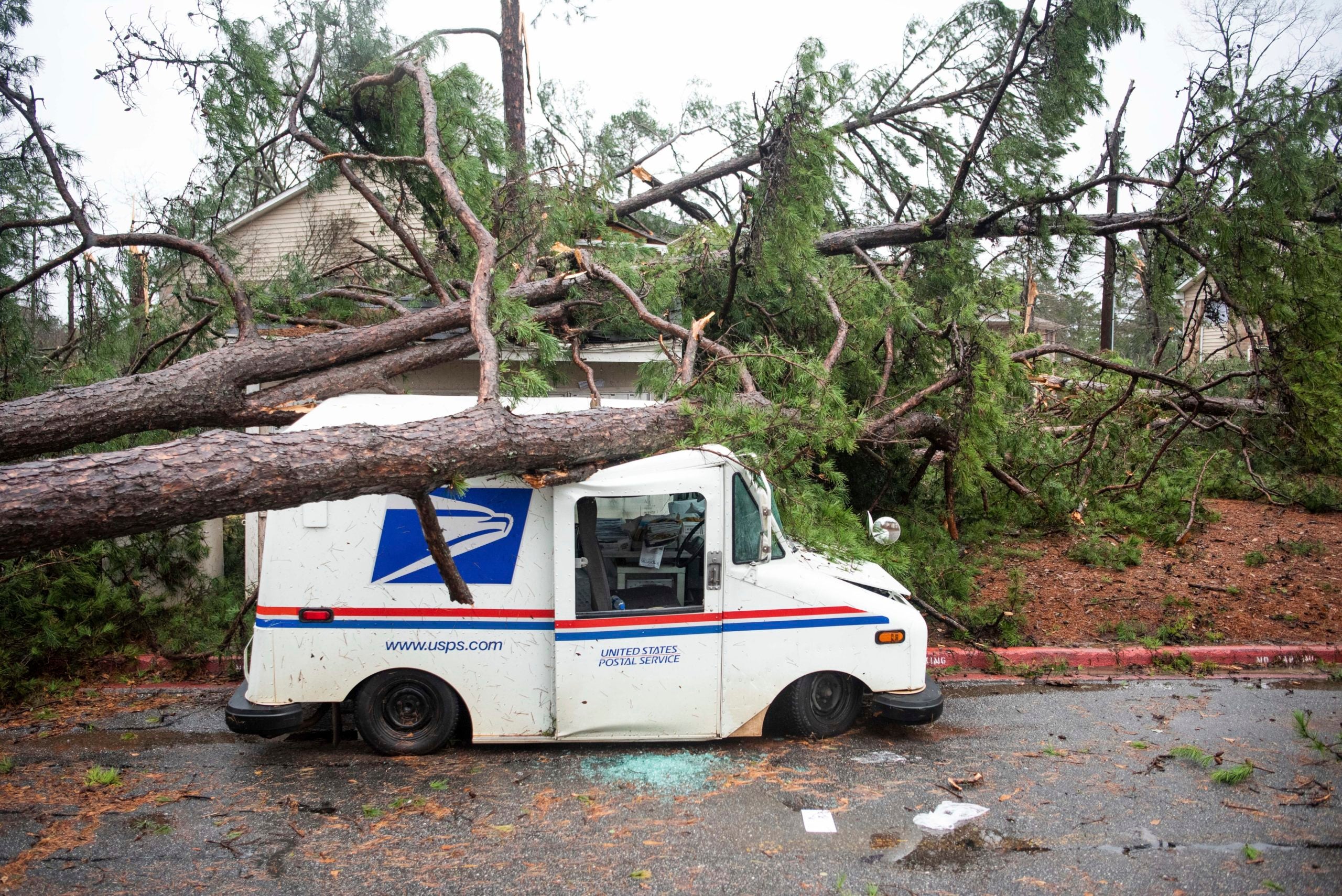 BIRMINGHAM, Ala. (AP) — Nearly 150,000 homes and businesses in the southeastern United States were without power early Friday after a powerful storm raked the region. At least four people were killed.

Florida bore the brunt of the power outages, with nearly 75,000, according to poweroutages.us. The Carolinas, Georgia and Virginia also reported outages, and tornado watches and warnings were in effect Thursday night from northern Florida up through North Carolina.

The National Weather Service advised early Friday that the storm system was strengthening in the mid-Atlantic region, bringing snow, ice and rain northward.

The weather destroyed mobile homes in Mississippi and Alabama, caused mudslides in Tennessee and Kentucky and flooded communities that shoulder waterways across the Appalachian region. Rain kept falling over a path of splintered trees and sagging power lines that stretched from Louisiana into Virginia. School districts canceled classes in state after state as bad weather rolled through.

Virginia Gov. Ralph Northam declared a state of emergency Thursday evening because of heavy rains and extreme flooding. More than 500 people in southwestern Virginia were displaced by flooding and needed rescue from their homes, he said in a statement.

Meanwhile, the Tennessee Valley Authority warned that people residing near rivers and lakes should prepare for rapidly changing water levels. The TVA is managing rising water behind 49 dams to avert major flooding, but with more rain expected next week, the agency may have to release water downstream, said James Everett, senior manager of the TVA’s river forecast center in Knoxville, Tennessee.

One person was killed and another was injured as high winds destroyed two mobile homes near the town of Demopolis, Alabama, the Storm Prediction Center reported. The victim, Anita Rembert, was in one of the homes with her husband, child and two grandchildren, said Kevin McKinney, emergency management director for Marengo County. A man was injured but the children were unhurt, he said.

High winds there left roadsides strewn with plywood, insulation, broken trees and twisted metal. The National Weather Service was checking the site for signs of a tornado.

Weather-related crashes left at least three people dead and numerous authorities pleaded with motorists to avoid driving where they couldn’t see the pavement.

In North Carolina’s Gaston County, Terry Roger Fisher was killed after his pickup truck hydroplaned in heavy rain, plunged down a 25-foot (8-meter) embankment and overturned in a creek, the North Carolina State Highway Patrol said, according to news outlets.

An unidentified man died and two others were injured Thursday when a car hydroplaned in Knoxville, Tennessee, and hit a truck, police said in a news release.

Other deaths were still under investigation late Thursday and yet to be explicitly connected to the storms.

In Tennessee, 36-year-old teacher Brooke Sampson was killed and four people were injured when a rain-soaked tree fell on a van carrying Sevierville city employees, officials said. The crash, though still under investigation, appeared to have been weather-related according to preliminary information, said Tennessee Highway Patrol spokesman Lt. Bill Miller.

Flooding, meanwhile, forced rescuers to suspend their search for a vehicle missing with a person inside it in north Alabama’s Buck’s Pocket State Park. The vehicle quickly disappeared Wednesday in waters too dangerous for divers to search.

“As the car started shifting because of the water we noticed what appeared to be an arm reaching out,” witness Kirkland Follis, who called 911, told WHNT-TV.