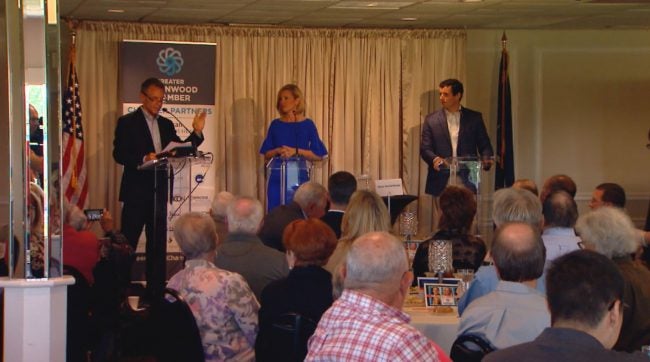 GREENWOOD, Ind. (WISH) – Candidates for the 9th congressional district faced off in a debate Monday afternoon. The debate was hosted by the Greater Greenwood Chamber of Commerce.

It was the first time the Greater Greenwood Chamber of Commerce held a debate. The audience mainly consisted of small business owners.

The debate lasted for about an hour and touched on many local topics like the I-69 construction project. But it also hit on topics that we’re hearing nationally, like gun violence.  Democrat Shelli Yoder even hit Trey Hollingsworth (R) for not releasing his tax returns.

Shelli Yoder, the Democrat in the race is a professor at IU Bloomington. She also sits on Monroe County Council. Trey Hollingsworth is the Republican, he comes from a business background. This would be his first time in politics.

“I believe that my skill set, my values represent what the 9th district longs for,” said Yoder.

The two debated over hot topics that directly impact the business community, namely the Affordable Care Act, gun violence, the gas tax and the construction of I-69, which runs straight through the 9th district.

Earlier this month the mayor of Bloomington said the project is behind schedule and that contractors aren’t being paid.

Hollingsworth equated that to a broken political system.

“Over and over and over again what we hear about a lack of accountability. That’s unacceptable in the private sector, and we should hold Washington and the public sector to the same standard,” said Hollingsworth.

Yoder meanwhile said she travels the road everyday, which she said is forcing her to make the country’s infrastructure a priority.

“I have made infrastructure investment the core of this campaign because as a member of congress we have to not only address the safety of our roads and bridges, but also be able to move commerce up and down,” said Yoder.

The two also touted the endorsements they’ve each received. Yoder has been endorsed by multiple first responders organizations, including the Indiana State Fraternal Order of Police, and the International Association of Firefighters.

As for the Greater Greenwood Chamber of Commerce, they say they don’t endorse candidates.