‘All hands on deck’ for restaurants during Final Four 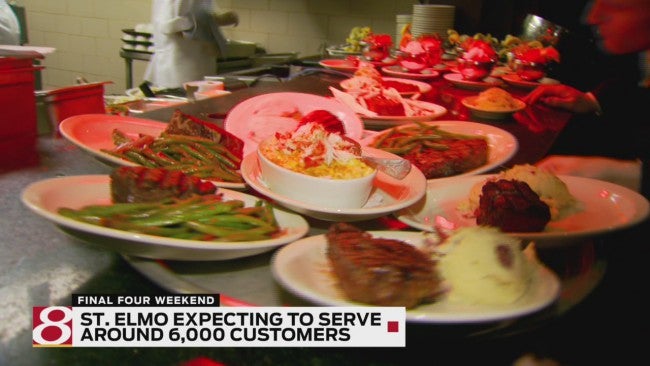 Some popular restaurants along South Illinois Street and East Maryland Street had to call for extra staffing on the floor and behind the scene.

Dinner service was underway at Mo’s A Place For Steaks Friday evening.

The steakhouse is just one of many with special hour accommodations in place for the busy Final Four weekend.

“We’re opened on Sunday this week, which we don’t ordinarily do,” said Browning. “We’re opening earlier in the day. Typically we don’t open until five we’re opening at 3 p.m.”

Nearly 70,000 people are expected to be in the downtown area exploring free concerts, activities and fine dining.

“It’s not quite as celebrity oriented but there’s plenty of that going on,” said Browning. “There’s always people looking for the big celebs who are sports guys and we got some of those that are here.”

But just a couple of blocks away over at St. Elmo Steakhouse, they’re experiencing the same thing.

Known for their world famous shrimp cocktail, the restaurant is anticipating around 6,000 customers by the end of the tournament.

Ratay knows this won’t be the last tourism rush for Indianapolis.

“When we think about, you know, the Super Bowl, when we think about the race weekends, there’s a different energy in downtown and you can sense it,” said Ratay. “We love it and we embrace it and it gives us a lot of energy.”

Ratay also says they brought in a few interns from the hospitality management program at IUPUI to help with service.

Some restaurants are still taking walk-ins if you don’t have reservations, but it’s always best to call ahead to double-check.