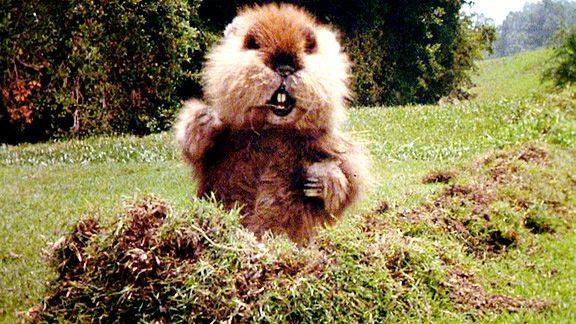 MERRIMACK, N.H. (AP) – Police in snow-swamped New Hampshire are hunting for Public Enemy No. 1: The suspect is described as short and furry with brown eyes and big, pointy teeth.

Looking to lighten the mood after a series of snowstorms, Merrimack police posted a gag on their Facebook page asking the public to rat out Punxsutawney Phil, the Pennsylvania groundhog who last week predicted six more weeks of winter.

“We have received several complaints from the public that this little varmint is held up in a hole, warm and toasty,” said the posting that was accompanied by an image of the mischievous groundhog from the movie “Caddyshack.” ”He told several people that Winter would last 6 more weeks, however he failed to disclose that it would consist of mountains of snow!”

Police Chief Mark Doyle said the idea came during a conversation with Lt. Denise Roy as they shook their heads over the three major storms that have thumped New England since Jan. 27.

“We were chatting about how sick and tired we were, and she came up with the idea,” Doyle said. “Everybody is looking at it for what it is: a tongue-in-cheek, lighthearted look at the winter we’re having in the Northeast.”

Doyle has heard from good citizens that Phil may be in Canada with Sasquatch. Others say the critter was spotted in New Orleans with a fistful – pawful? – of Mardi Gras beads.

It’s not the first time Phil’s gotten in trouble with the law: Officials in Ohio in 2013 “indicted” him for misrepresentation of spring, a felony “against the peace and dignity of the state.”

On the New Hampshire Facebook page, Phil is described as “armed and dangerous.” Doyle says if he gets his hands on the wily woodchuck, he’s got the perfect sentence in mind:

“Life in the hole without parole,” he said.