Another artist eats banana duct-taped to wall that’d sold for $120,000 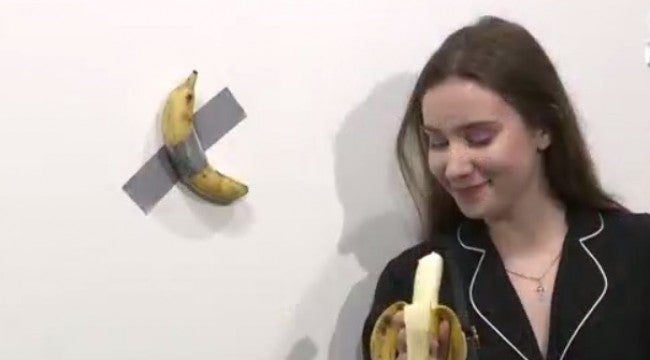 MIAMI (WFOR/CNN/WISH) — A performance artist on Saturday afternoon ate the piece of art, a banana duct-taped to a wall, that sold Friday for $120,000.

Gallery representatives told the Miami Herald that performance artist David Dutuna ate the work of art in front of a convention full of art lovers.

Lucien Terras, director of museum relations for Galerie Perrotin, told the Herald, “He did not destroy the art work. The banana is the idea.”

The buyer actually bought the artwork’s Certificate of Authenticity. The banana was not meant to last, Terras said.

A visitor to the fair offered a banana that was used to replace the original about a half-hour later.

What was the message the artist is trying to get across? Some believe the piece is mocking the art world and its inequalities. Others simply say don’t overthink it.

Jokes aside, there were actually three editions of this piece, and the third was to likely collect the highest price, $150,000.

The banana art drew large crowds to the Art Basel fair on Saturday.