Bills on ISTEP tests, state superintendent up for vote Tuesday 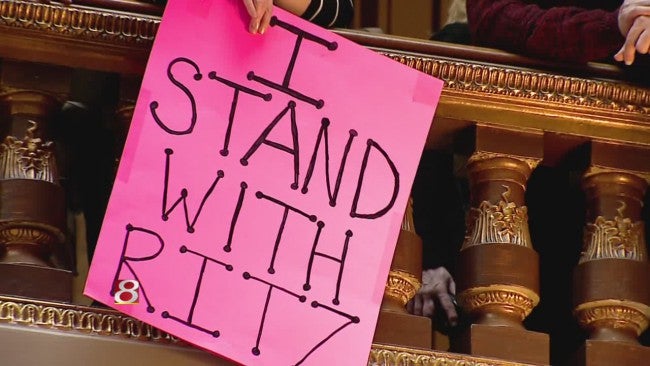 INDIANAPOLIS (WISH) – Education reform will command the conversation at the Statehouse Tuesday as several bills go up for a vote, including one that some argue is more of a power struggle between the governor and state superintendent.

The bill that would remove State Superintendent Glenda Ritz from her position as chairman of the State Board of Education was open for a vote Monday, but the senate delayed the vote until Tuesday.

All that happened while a rally more than a thousand strong filled the Statehouse. The people there were supporting Ritz.

They don’t want her to be removed, especially as other education related bills make their way through the house.

“Never forget it’s not the politicians that own this house, it’s you the people,” proclaimed Sen. Tim Lalane (D-Minority Leader), to Ritz supporters.

And own the house they did. From top to bottom, they sent a message that rang throughout the halls of the Statehouse. Republican lawmakers were invited but did not attend.

“I am sick and tired of non-educators deciding education policy,” one woman vented at the podium.

That argument falls right in line with the bill that would remove Ritz, a democrat, from her seat as head of the State Board of Education. It would also allow the board to pick the next state superintendent, not the voters.

“I don’t understand how I’m supposed to use my voice and vote when ultimately the government is going to take that voice away from me by taking away an elected position,” said Phoebe Sherer, a high school student from Cedar Lake.

Their concern didn’t stop there. Even though Ritz and Governor Mike Pence agreed to shorten I-STEP testing, some worry it’s not the right way to measure a teacher’s performance.

Alongside that bill, the senate can vote Tuesday to shorten the length of I-STEP testing. Last week, Governor Mike Pence and Ritz agreed to cut it down from 12 hours to about nine.