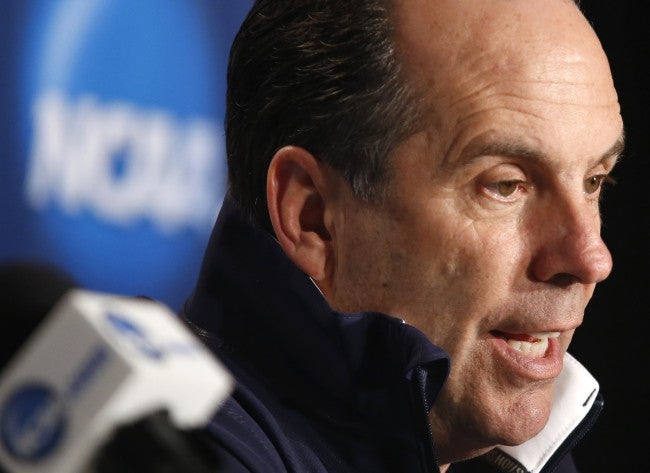 SOUTH BEND, Ind. (AP) – Notre Dame coach Mike Brey walked into the locker room shortly before tip-off against Butler and told his players that someone in the hotel had asked him why he had been smiling all day.

“You know why?” he told his players. “Because I have a great team, baby. I’ve got a great team.”

After the game, Brey burst into the locker room and shouted to his players, “Is it past midnight?”

“It is,” a player shouted back.

“Well it’s my birthday and that’s a hell of a birthday present. Thank you so much,” the 56-year-old coach said moments after the Irish beat Butler 67-64 in overtime early Sunday morning to advance to the Sweet 16 in the NCAA Tournament for the first time since 2003.

The self-described “loosest coach in America” showed no signs of the long day he had endured until 20 minutes after the game was over and his players had time to savor their accomplishment. That’s when athletic director Jack Swarbrick told players about the loss of Brey’s 84-year-old mother, Betty, who passed away Saturday morning.

Swarbrick said that is typical Brey.

“It shows how he feels about his kids,” Swarbrick said. “That’s so preeminent with him, not wanting to be a distraction or not being available to his kids.”

Brey said he never thought about skipping the game, saying his brother encouraged him to stay with the team, saying “Dad’s great. We’ve got him over the house. … Beat Butler.”

Brey said he knew it’s what his mother would have wanted. She swam at Purdue and competed in the 1956 Olympics. She later was a swim coach at George Washington University.

“An unbelievable woman, a woman ahead of her time and probably the real driving force behind everything I’ve done,” Brey said.

Brey’s father, Paul, was a high school athletic director. Brey talks frequently about two of his mentors, DeMatha High School coach Morgan Wooten, whom Brey coached under for five years in Hyattsville, Maryland, and Duke coach Mike Krzyzewski, whom he coached under for eight years. But he said his two biggest mentors were his parents.

“I grew up with two of the best educators ever,” Brey said. “Every kid that they touched, whether the swimming pool they ran in the summer or as high school educators, loved them. I learned a lot right there, that their pupils loved them. I tried to emulate my mom and dad as far as how I interact with people.”

Swarbrick said Brey’s parents would have wanted their son to be with his players.

Brey traveled to Orlando, Florida, on Sunday to be with his father and his brother and sister. He returned to South Bend in the early hours Monday and coached the team at practice. He didn’t talk with the media on Monday.

Swarbrick gave Brey a giant hug after the game because he knew what Brey had been through.

“I probably would have given him a hug anyway, but it was a little different hug because I knew what the day had been like,” Swarbrick said.