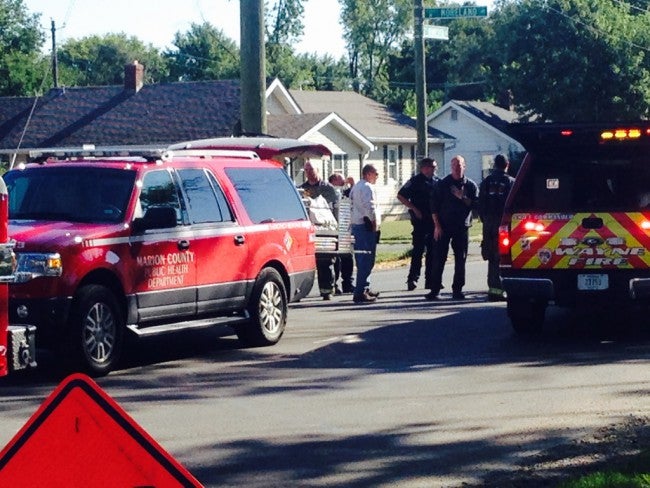 INDIANAPOLIS (WISH) – A community is demanding answers from a chemical company after a white powder it released covered a neighborhood.

The substance was released Sunday from the Vertellus plant on the southwest side of Indianapolis.

Monday night the company held a town hall question and answer session with neighbors, and about two dozen of the affected community members went for answers.

They showed up very upset about the powder release and possible health effects.

One of those neighbors is Michael Sanders.

“You can actually see it running along the windows,” he said.

Sanders has washed his car since the chemical release Sunday, but said the powder is not going away.

“Everyone’s washed cars, sprayed cars off, the neighbor down the street is getting pressure washed for the second day in a row,” he said.

But neighbors near Minnesota Street and Tibbs Avenue in southwest Indy still see the white substance all over the place.

“It’s in the grass, you can stomp your feet in the grass and watch a plume of it pop up in the air,” Sanders said.

Neighbors like him are worried that this stuff sticking around may cause health issues.

“What does it do? What are the long term effects?” he said.

They took those questions to Vertellus employees Monday night asking for an explanation.

The company reports the powder is made of earthen materials and doesn’t pose an immediate risk.

“The substance that was released is very much like clay and soil. In very small amounts it is non hazardous non toxic,” Dir. of Global Operations for Vertellus Todd Donmoyer said.

The neighbors were also worried about what they felt has been a slow response from the company in cleanup.

Donmoyer said he sees they need to have more interaction with the neighborhood.

He said the company will work harder on the cleanup in the coming week.

“What we are hearing tonight is they desire a long term commitment partnership and this is the first step in helping to do that,” he said.

But Michael Sanders is still worried about living near the plant in case this happens again in the future.

“The repercussions of covering everyone’s home, everyone’s car for two blocks with a chemical, any kind of chemical,” Sanders said.

Many of the neighbors left unhappy after that meeting because they weren’t convinced there isn’t a health risk.

Also, the company still doesn’t know what caused the mass release of the powder.

The company representatives said an internal investigation could take about a month and they’ll follow up with neighbors afterward.