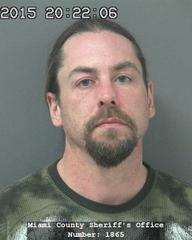 During a patrol on Friday morning, ISP found a bond recovery agent who was conducting surveillance on a nearby house on the 2200 block of West Third Street.

The bondsman told police he was tracking down Jamie Schultz, who was out on bond on criminal charges for possession of controlled substance. The bondsman saw Schultz going into the West Third Street home.

ISP and Miami County Sheriff’s Department obtained a search warrant for the home, where Schultz was found hiding under insulation in the attic.

Schultz was in custody at the Miami County Jail on Friday for the four arrests. He faces additional possible charges of felon in possession of firearms, possession of marijuana and possession of drug paraphernalia.