Detective refuses to give up on finding quadruple murder suspect 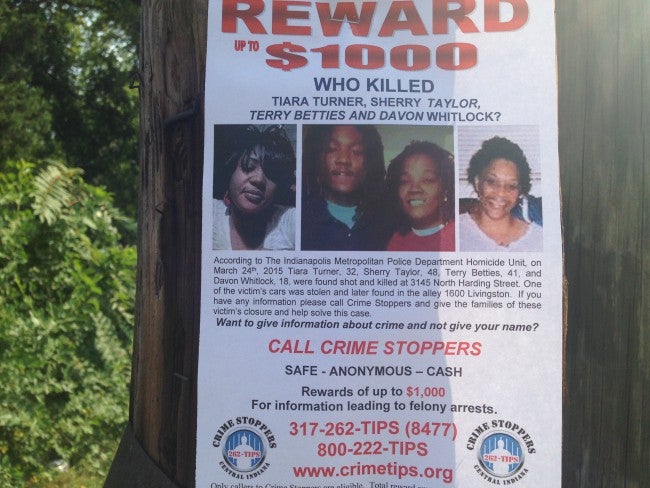 INDIANAPOLIS (WISH) – On March 24, four people were found dead when detectives were called to the 3100 block of North Harding Street.

Once inside, investigators discovered the bodies of Tiara Turner, 32, Sherry Taylor, 48, Terry Betties, 41, and Davon Whitlock, 18.

All four died from multiple gunshot wounds. In the aftermath, detectives talked to family members, neighbors and even those that had some level of contact with the victims.

More than 150 days later, police are still no closer to making arrest in the murder investigation.

“This is very unusual, that no one will come forward. It’s been really hard,” said IMPD Homicide Detective Marcus Kennedy.

On Tuesday morning, Kennedy returned to the neighborhood with flyers in hand. Each flyer has a picture of all four victims with a brief description of what happened. The flyers also include an offer for an $1,000 reward for information leading to an arrest of a suspect.

Despite the lack of tips, Kennedy remains determined to find who is responsible for killing the four victims.

He adds he draws his motivation to identify a suspect from the victims and the victims’ family members.

Kennedy walked door to door with his flyers, placing the flyers on the doors, light poles and even on fences.

“I’m talking to people while I’m out here, sometimes they feel comfortable, I’ll pass them out,” said Kennedy.

Investigators urge anyone with information to call Crime Stoppers of Central Indiana at (317) 262-TIPS (8477). Callers may also text “INDYCS” plus tip information to 274637 (CRIMES).