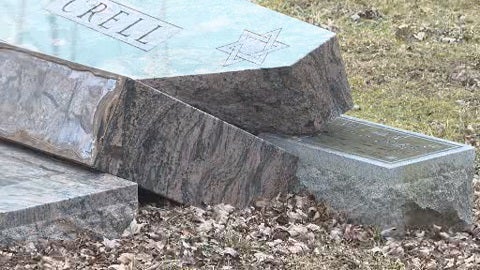 FORT WAYNE, Ind. (WANE) – Some local families are looking for answers after their loved ones’ headstones were damaged over the weekend at the Fort Wayne Jewish Cemetery.

On Monday, groundskeepers discovered more than 50 headstones toppled over and several severely broken.

There was no graffiti to indicate that the vandalism was aimed at the Jewish community.

The Fort Wayne Jewish Cemetery is a private cemetery located on Decatur road on the city’s south side.

It is surrounded by a high fence and the gateway is locked at all times. Aside from the groundskeepers, the family of the deceased are the only ones with a key.

Dan Zweigg, the President of the Fort Wayne Jewish Cemetery, suspects there were multiple people involved because it’s difficult for one person to knock over the headstones.

According to Zweigg the vandalism must have occurred within the last three to four weeks. The last time the groundskeepers were there was on Jan. 7.

Now, as the police work to investigate the case, Zwiegg is working to contact the families affected.

Authorities are trying to narrow down a window of time when the vandalism occurred.

If you were visiting a loved one’s grave between January 7th and February 1st, you are asked to contact Dan Zweig at fwjewishcemetery@gmail.com.