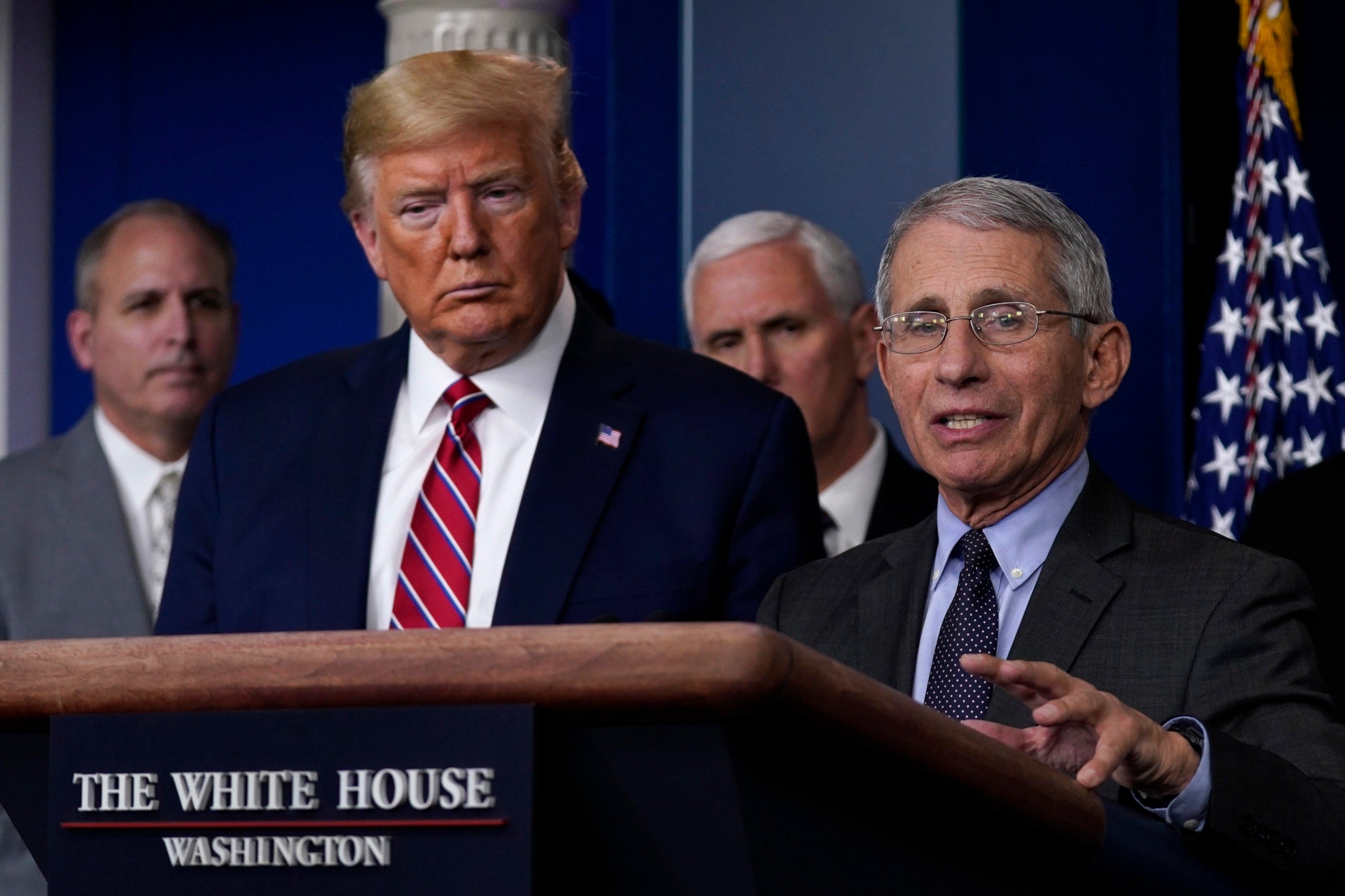 (CNN) — A frustrated and at times foul-mouthed President Donald Trump claimed on a campaign call that people are tired of hearing about the deadly pandemic which has killed more than 215,000 Americans and trashed Dr. Anthony Fauci as a “disaster” who has been around for “500 years.”

Referring to Fauci and other health officials as “idiots,” Trump declared the country ready to move on from the health disaster, even as cases are again spiking and medical experts warn the worst may be yet to come.

Baselessly claiming that if Fauci was in charge more than half a million people would be dead in the United States, Trump portrayed the recommendations offered by his own administration to mitigate spread of the disease as a burdensome annoyance.

“People are tired of Covid. I have the biggest rallies I’ve ever had, and we have Covid,” Trump said, phoning into a call with campaign staff from his namesake hotel in Las Vegas, where he spent two nights amid a western campaign swing. “People are saying whatever. Just leave us alone. They’re tired of it. People are tired of hearing Fauci and all these idiots.”

A Trump adviser later questioned the wisdom of attacking Fauci just two weeks before the election. The adviser described the President’s comments as “not smart” because they keep the focus on the coronavirus pandemic, the one topic campaign officials would like to avoid the most.

Fauci has been the director of the National Institute of Allergy and Infectious Diseases since 1984 and is a member of the White House Coronavirus Task Force. At almost the same time Trump was fuming on the phone, Fauci was being awarded the National Academy of Medicine’s first-ever Presidential Citation for Exemplary Leadership during a virtual ceremony. Fauci said that he was “speechless” while receiving the recognition.

“We have a lot of challenges ahead of us and I can’t help thinking that we’re really going through a time that’s disturbingly anti-science in certain segments of our society,” Fauci said during the virtual event.

Trump openly criticized Fauci as his campaign is currently airing a television ad featuring the doctor that implies Fauci endorsed Trump’s handling of the pandemic.

Fauci has disputed the ad, saying his words were taken out of context, and asked the campaign to take it down. But the ad was widely seen as an acknowledgment by the President’s campaign staff that Fauci has credibility with voters who have rejected Trump’s response.

The President is trailing in polling to Democratic rival Joe Biden in part due to his mishandling of the coronavirus pandemic. Trump recently returned to the campaign trail after being diagnosed with the virus himself and has shunned public health protocols for his political rallies. On the call, the President again mocked Biden’s social distancing measures.

As he barnstorms electoral battlegrounds, Trump has been casting about for a closing message that resonates with voters addled by the virus and wary of his response. Attempts by his advisers to convince Trump to adopt a more serious tone about the pandemic have been halting. At a rally in Nevada on Sunday, Trump attempted to attack Biden by saying his rival would “listen to the scientists” if elected president.

By contrast, Trump has stopped attending meetings of his coronavirus task force, which has waned dramatically in influence. Instead the President has relied on the counsel of Dr. Scott Atlas, a radiologist whose views on mask wearing and other mitigation practices are at odds with nearly every scientific opinion.

The dynamic has caused tensions among the government’s health officials, including with Fauci, whose warnings about the virus Trump has bristled at for months.

“If there’s a reporter on, you can have it just the way I said it, I couldn’t care less,” Trump said. CNN was given access to the call by a source.

Trump’s attempt to shore up his campaign staff 15 days before Election Day came amid widespread worries among Republicans that his inability to hone a final message will have dire effects not only for his own race but for control of the US Senate.

Even as his anger was evident on the call, Trump sought to project optimism.

“This is the single best I have ever been in any campaign,” Trump said regarding his reelection chances. “Today is the best single day that I’ve felt on either campaign.”

“We are going to win,” he said “I wouldn’t have said that three weeks ago.”

After stories emerged about early campaign finger-pointing ahead of a potential loss, Trump insisted he was satisfied with the work his team is doing — including his chief of staff Mark Meadows, who has been blamed internally for badly mismanaging Trump’s Covid diagnosis and subsequent hospitalization.

“I love Mark Meadows. It took me two years to get him out of Congress. Mark Meadows is doing a good job. I’m not dismissing him.”