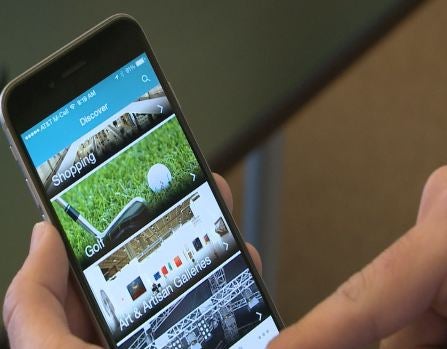 FISHERS, Ind. (WISH) – When thinking of leading technology towns, many people typically think of Silicon Valley or New York City. But entrepreneurs in Indiana say the state is becoming a major player in the tech sector and a hotbed for innovation. The founder of one growing startup says its Central Indiana location has been key in its success.

“Organizations need an app because consumers are there. Consumers are now using smartphones and apps more than mobile web and even the entire Internet combined,” said Jaramillo.

Jaramillo said he created an app platform that is easy and affordable for its clients. Clients can pay an annual subscription for an app that Bluebridge will constantly update as technology improves. Jaramillo said comparable apps and updates could cost customers hundreds of thousands of dollars.

“It’s this idea that you’re not just getting an app once. You’re really getting a mobile app platform that’s getting better over time,” said Jaramillo.

Now Bluebridge boasts itself as the largest tourism app platform in the world.

“We have more tourism clients like South Africa the country; Gatlinburg, Tennessee; Hamilton County is an excellent partner of ours – and they have two apps powered through the Bluebridge platform,” said Jaramillo.

Local entrepreneur and Launch Fishers founder John Wechsler saw the potential when Jaramillo was generating $100,000 in sales out of his dorm room. Wechsler made Bluebridge the first member at Launch Fishers, a co-working space that gives startups a place to work, room to grow and time to build funding.

“The mainstream public might not think of Indianapolis and the Central Indiana area as a major tech player, but I can tell you the venture capitalists do,” said Wechler.

Bluebridge soon moved out on its own and increased its workforce from from three to 30 employees in less than two years. The team soon outgrew its office and is now building a new, bigger headquarters next to Launch Fishers, where it got its start.

“The talent pool here has been superb with the universities that we have here in town. As well as a booming technology sector that’s really building momentum,” said Jaramillo.

You can almost feel the momentum in places like Launch Fishers as the next wave of startups get going, following the footsteps of the technology companies before them.

“Companies like Exact Target, Interactive Intelligence, Aprimo have really led the way as the first, second and third generation of tech startups and companies that have really grown to be world class, leading providers in their categories,” said Jaramillo, “I think that’s allowed small startups like us, and younger ones to really benefit from all of the path that they’ve laid out. From how well they train their talent in the tech industry…from realizing it is very possible to grow world class technology company right here in Indiana.”

“We’re now at that point where we see that flywheel affect of attracting more entrepreneurs with an interest in building innovation-driven enterprises. I think that’s what’s going to fuel our growth for the next decade,” said Wechsler.WEB EXTRA: Santiago Jaramillo gives advice to young entrepreneurs. See the video here: