Fire victim to officers: ‘Thank you for saving my life’ 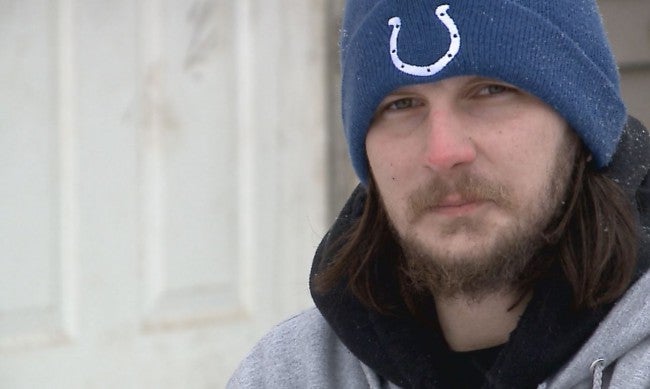 It happened in the early morning hours on New Year’s Day in Wayne Township. Officials said officers ran into the burning home to pull a man inside out. Medics rushed 26-year-old Samuel Medley to the hospital in critical condition. Nearly two months later, the recovery process is ongoing, but Medley says he’s now thankful for every moment. He’s especially thankful to those in blue who rushed into his home to get him to safety.

“He doesn’t think he’s a hero, but he is. To my daughter and my family he is,” said Medley. “All I can say is, ‘Thank you. Thank you for saving my life.'”

Medley spoke with 24-Hour News 8 outside the home he and his mother used to live in on West Vermont Street on the city’s west side. He says when the fire started, all he could think about were his dogs. He ran into the home to try to get them out.

“When it started to become harder to breathe, I tried crawling. The farther I got, the hotter my hands were getting,” said Medley. “By that point, I was too overcome to go any farther. So I just curled up in a ball and covered my face and started screaming for help. That’s when the officer, I saw his light.”

That first light was from IMPD officer Gary Hadden, who was on the scene along with officers Brian Thorla and Skip Copeland. Thorla went to the back of the house to try to find Medley, and Hadden went into the front. Officials said as Hadden picked up Medley to bring him outside, debris started falling on them. Officer Copeland and Thorla were able to help them both out.

“It’s our job, and if we are called to action, it’s what we do. It’s what we need to do,” Officer Hadden said in a January interview.

Medley says he spent days in a medically-induced coma and then two weeks in the hospital. He badly burned his hand and his back, and he says he now goes to rehab to try to work on restoring all function to his hand.

Above all, he says he owes those officers his life. He’s hoping to send them a message of thanks.

Medley says firefighters were able to help get his dogs get out safely. The fire badly damaged the home. He says he and his mom didn’t have insurance on the home, but they’re still hoping to rebuild. He says he just needs the supplies to do so, at this point.

They’ve set up this Go Fund Me page with more information on what they need.