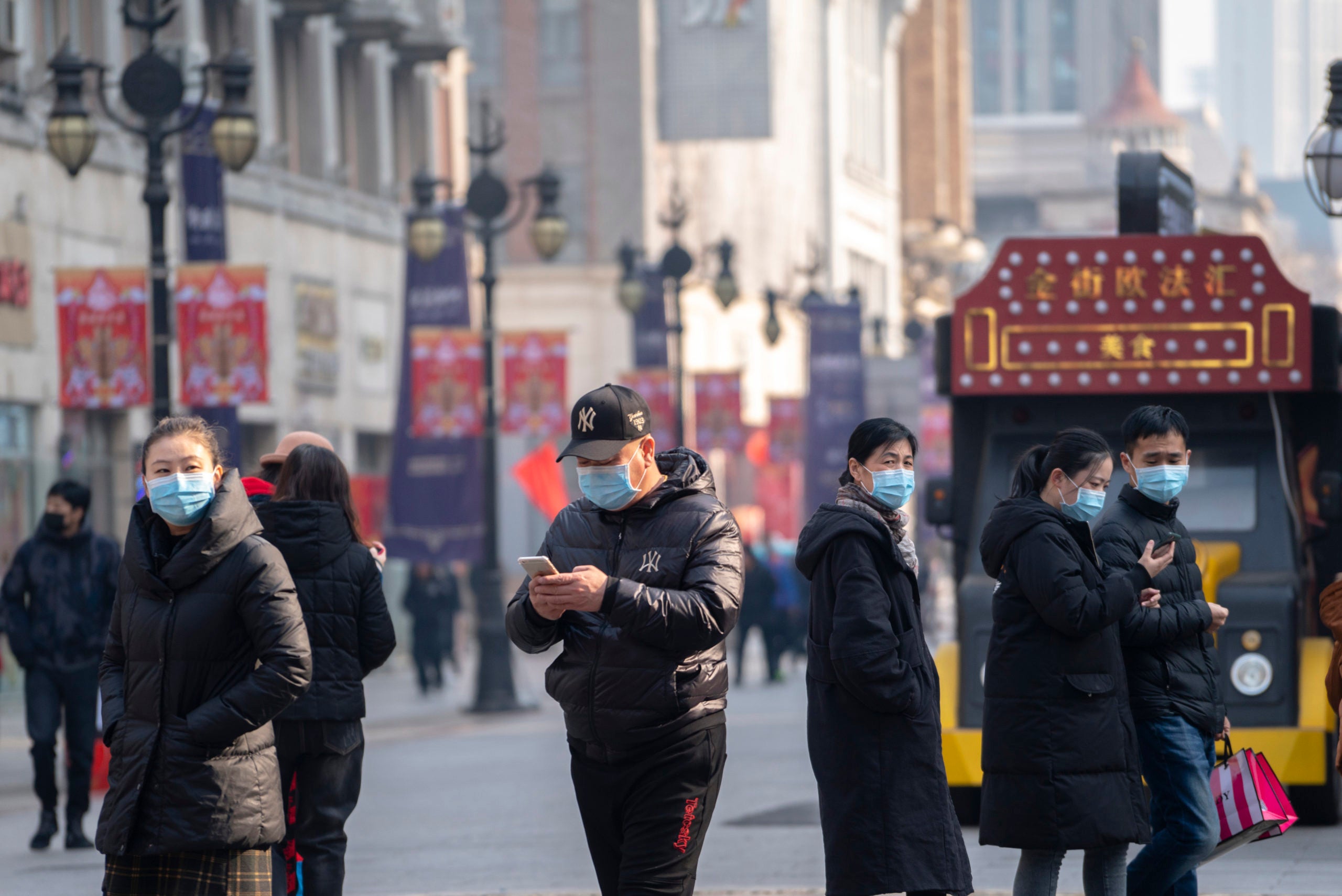 TIANJIN, CHINA - 2020/01/25: People wearing masks walking on the famous business street of Binjiang Dao, at downtown Tianjin. Wuhan New coronavirus pneumonia has been spread around all provinces in China, but Tibet. The government call the people stay in home or wear mask outside in this spring festival. The quick infection arouse fear among people, and many cities cancelled the folk activities such as temple fair to avoid people over gathering. It might bring non-negligible influence to China's economy. (Photo by Zhang Peng/LightRocket via Getty Images)
by: KEN MORITSUGU Associated Press
Posted: Jan 30, 2020 / 05:12 AM EST / Updated: Jan 30, 2020 / 05:12 AM EST

India and the Philippines reported their first cases, in a traveler and a student who had both been in Wuhan, the central Chinese city where the new type of coronavirus first surfaced in December. South Korea confirmed a case that was locally spread, in a man who had contact with a patient diagnosed earlier.

Locally spread cases outside China have been a worrying concern among global health officials, as potential signs of the virus spreading more easily and the difficulty of containing it. The World Health Organization is reconvening experts on Thursday to assess whether the outbreak should be declared a global emergency.

The new virus has now infected more people in China than were sickened there during the 2002-2003 SARS outbreak.

Thursday’s figures for mainland China cover the previous 24 hours and represent an increase of 38 deaths and 1,737 cases for a total of 7,711. Of the new deaths, 37 were in Hubei province, of which Wuhan is the capital, and one was in the southwestern province of Sichuan.

Three of Japan’s confirmed cases were among a group of evacuees who returned on a government-chartered flight from Wuhan on Wednesday. Japan’s foreign ministry said a second flight carrying 210 Japanese evacuees landed Thursday at Tokyo’s Haneda airport. Reports said nine of those aboard the flight showed signs of cough and fever.

India’s health ministry said a student in Kerala state who had been studying in Wuhan was confirmed to have the virus after returning home during the Lunar New Year break. Philippine health officials say a woman who traveled to the country from Wuhan via Hong Kong had tested positive.

The United States evacuated 195 Americans from Wuhan who are being tested and monitored at a Southern California military base. France, New Zealand, Australia, India, Singapore and other countries are also trying to get out their citizens. Taiwan, the self-governing republic China considers its own territory, has also asked to be able to repatriate its passport holders from Wuhan.

In South Korea, residents in two cities where quarantine facilities are being prepared threw eggs and water bottles at government officials to protest plans to isolate in the neighborhood 700 South Koreans the government plans to evacuate from China.

Amid reports of shortages in food and daily necessities in hot-spot areas, Chinese authorities are “stepping up efforts to ensure continuous supply and stable prices,” the official Xinhua News Agency reported.

It cited Ministry of Commerce data showing current reserves in Wuhan can ensure a secure supply of rice and cooking oil for more than 15 days, pork and eggs for more than 10 days and vegetables for about five days.

China’s highly developed online shopping and home delivery businesses were important in ensuring those confined to home by choice or by order could get food and other essentials.

“I’d just like to ask that folks don’t order anything other than the daily necessities,” Hou Yanbo, deputy director of market supervision from the National Post Administration, told reporters at a daily briefing.

China extended its Lunar New Year holiday to Sunday to try to contain the virus, but the wave of returning travelers could potentially cause the virus to further spread.

School openings in Hong Kong, Beijing and other regions have been extended by at least two weeks.

The WHO emergencies chief, Michael Ryan, spoke in Geneva after returning from Beijing. He said China was taking “extraordinary measures in the face of an extraordinary challenge” posed by the outbreak.

To date, about 99% of the cases are in China. Ryan estimated the death rate of the new virus at 2%, but said the figure was very preliminary. With fluctuating numbers of cases and deaths, scientists are only able to produce a rough estimate of the fatality rate and it’s likely many milder cases of the virus are being missed.

In comparison, the SARS virus killed about 10% of people who caught it. The new virus is from the coronavirus family, which includes those that can cause the common cold as well as more serious illnesses such as SARS and MERS.

Scientists say there are many questions to be answered about the new virus, including just how easily it spreads and how severe it is.

Chinese authorities have demanded anyone who traveled from or through Wuhan report to health authorities and self-quarantine themselves for 14 days, the maximum incubation period during which patients can be infectious even if they don’t show symptoms.

China has been largely praised for a swift and effective response to the outbreak, although questions have been raised about the police suppression of what were early on considered mere rumors — a reflection of the one-party Communist state’s determination to maintain a monopoly on information in spite of smart phones and social media.

That stands in stark contrast to the initial response to SARS, when medical reports were hidden as state secrets. The delayed response was blamed for allowing the disease to spread worldwide, killing around 800 people.

This time, in addition to working with WHO, China’s health minister Ma Xiaowei has been in touch with foreign colleagues, including U.S. Secretary of Health and Human Services Alex Azar.